Sometime towards the end of May this year, my dream came true (well kind of) and I met Will Young! 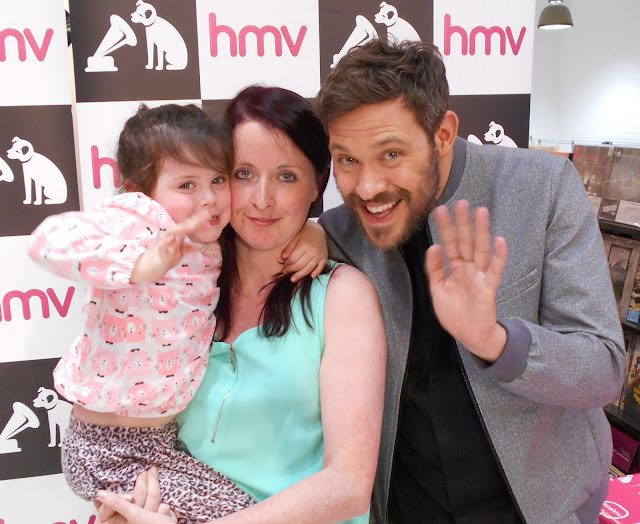 It wasn't quite like I imagined it would be, but I met him never the less!

Will was doing an album signing at the Manchester Arndale branch of HMV.

I found out about it, literally last minute, a couple of hours before he was due there. It was a bank holiday Monday and we had stayed in and not been up to anything. It seemed crazy rushing out to Manchester, especially as it was via public transport but this was the first actual chance I'd had to meet him and I've wanted to since I was a young teenager, when he sang his way into the nations hearts on pop idol, all those years ago.

Luckily once at the train station, a train only takes about 7 minutes from where we are to the city center and once in the center I carried Grace as quickly as I could to the Arndale Center. I got horribly over heated, didn't feel very well, was in an awful outfit, definately having a bad face day (if there ever are good ones) and Grace was dressed in an outfit that resembled pyjamas.

I've never queued up with Grace to meet a famous person, infact I've never really queued up to meet a famous person at all, but it's definately not something I'd put her through regularly. We were at the end of the queue and when we got there she was really excited, dancing about to his music and happy. By the time we were nearing the front she was totally fed up and I was stressed!

When it was our turn he went to greet Grace and she'd gone from being excited to meet him to being incredibly shy and hiding behind me. Will crouched down to try and chat to her but she kept hiding away. He won her over by talking about her cat top and shoes, he was lovely with her.
Instead of saying anything of interest I blurted out a load of rubbish and probably come over totally loopy! Not the way I would have liked it to go. After a chat we had a photo with him and he offered to pick Grace up and hold her for it but she got all shy again so I held her instead.

It topped the moment of meeting Derren Brown, but I didn't really attempt much conversation with him, except about him taking my sister on stage.
I was still over the moon to meet Will Young but I do wish I'd been able to think straight when actaully talking to him!

Email ThisBlogThis!Share to TwitterShare to FacebookShare to Pinterest
Labels: throwback thursday, Will Young