Our new additions to the family - G's first pets 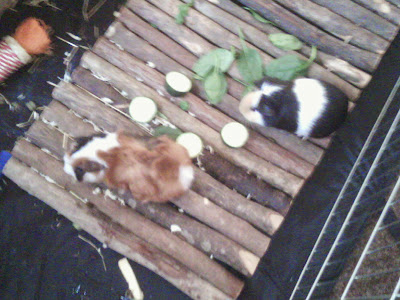 We had some new additions to our little family last month.

Say hello to the imaginatively named Gracie and Fluffy (originally named Floppy). Sadly I'm yet to get a good photo yet. I have to be honest I haven't really tried as I always have something else I need to be doing but when I do try they don't stay still very long! Either that or I'm trying to teach G how to handle them properly and not walk round with one like she's carrying a teddy. :)

G's nana and granddad very kindly brought them for her including the cage and run and all that goes with these little furry creatures. It wasn't a random purchase, there is a reason behind it. 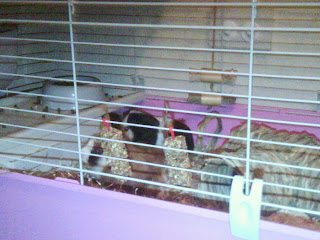 G loves animals and being around people. We have a cat, Bella, who I've had since I was 21, however all G ever see's off her is a furry blur scarpering off into the distance. Bella is not a fan of loud fast moving humans.......so any young children. Since G was mobile Bella has kept her distance, as an excited baby squealing and trying to grab her tail was not an activity that appealed to her. This was a shame for G as she loved her and in fact her first proper word was cat! It also means that G herself does not really have a pet and while this is not a necessity for child there are other factors involved.

Since myself and her father split up over 2 years ago it has just been me and G. For significant reasons I will not go into on this blog, she rarely see's her father and at points this affects her. Especially when nosy little rats (just the one) from down the road come peering in the door when we are trying to leave the house, asking 'Where's her father? Why isn't he here?'. Then your at the time two year old starts thinking about it too from then on and asks a couple of days later, with tears in her eyes 'Daddy loves me doesn't he?' 'He'll see me soon won't he?'
It crushes me.

I am her best friend but I also know that sometimes she gets lonely and longs for other children to be round the house. She actually said the other day she wanted "a baby sister and a baby brother mummy. That's what I'd like". This breaks my heart and I'd love to give her a sibling but obviously that isn't possible at all right now and not just because I'm not currently in a relationship.
Luckily she has nursery 3 afternoons a week at the moment and I try and arrange social activities where she'll be around other children as often as I can but that can depend on money and also my health too. I know what she really wants is a little friend who can be there all the time.

G absolutely loves dogs and they are the kind of pet that is suited to her. Energetic and happy to play and run and cuddle up and chat to. There is a family down the road with two beautiful dogs who she loves to say hello to and invented her own imaginary dogs a couple of months ago ( Malic, Gracie, Floppy and Lil lac - the names 3 year old's come up with?!) who she tells me stories about. I would love to get her a puppy as a companion, to grow up with her, but financially this is not possible yet. It really gets to me that there are such important things I can't provide for her. Some factors that are out of my control and many others I am on the path to try and correct but the light at the tunnel seems a long way away at the moment. When I have succeeded in my first step then I will have hope and that hope will propel me the rest of the way or at least keep me clinging on through more tough times to come before my and therefore our, lives are back on track.

Her nana knows of my frustrations and worries and being such a kind and considerate person brought two little friends of her own into G's life. 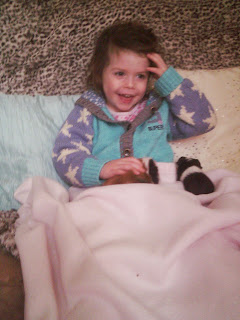 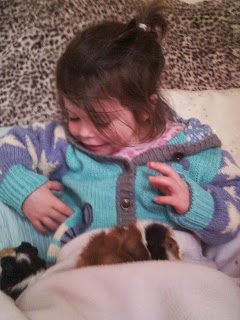 Having them is a big learning journey for G. Learning to be gentle enough, how to handle them, learning that they need quiet. It is good for her to learn these lessons.
She did first try to excitedly show them her toys and would chat to them like a younger sibling. She also tried to throw and shake a ball for them like you would for a dog. It was hard to tell her you can't do that with a guinea pig as it scares them but she loves to have them on her knee as a little friend when she gets to have a DVD on or to look at herself in the mirror when holding one and sing to them. She also likes to choose and give them their gnawing sticks. Attaching them to the cage herself.
It's still early days and she will get more used to handling them and will soon be old enough to get them out herself. They have made the house less empty. 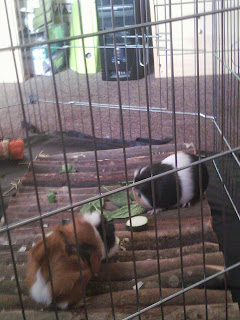 If looked after properly and made to feel safe, guinea pigs can be very friendly animals once they have settled in/got to know you. Fluffy in particular is quite laid back and is G's favourite. She does however have a problem with liking to nibble on fingers as she will eat anything in front of her but I'm hoping we can get round that somehow. Gracie is the more timid of the two but is inquisitive and will make a racket if she thinks there is food about that's not being given to her. We will be getting them out in the morning to have a little run and for G to have some more bonding time with them.


Does your children have their own pets? How important is the role of a pet in your household?

Email ThisBlogThis!Share to TwitterShare to FacebookShare to Pinterest
Labels: first pets, hopes for the future, new addition, only child, providing for my child, single mum