A lot of G's old younger selection of baby toys &clothes have either been bagged up to sell, already sold or given to a charity shop. However toys wise there are still a few she either still uses or wants to keep hold of. Her Mabyland toys are some in that category.
Here is the review I did on one of their products, brought up to date.


When pregnant I started entering a lot of pregnancy and baby competitions and continued to for a few months after my daughter was born. I was lucky and won several prizes over that space of time. One of them from Mabyland via their facebook page.

MabyLand have a range of gorgeous baby products based around four main characters, doggy, teddy, kitty & bunny. The soft toy items in particular are friendly, soft and colourful so your baby is bound to love them.


The prize up that I was lucky enough to win, was a choice of a pair of their peg rattles; either Doggy &Teddy or Bunny & Kitty. With me being a cat lover I went for the latter and with submission of my address my prize arrived the very next day!

The packaging of the product itself is very appealing and promotes all four of the peg rattle range.
The characters are a lovely design with friendly bright faces and the colours are warm and appealing. My only criticism is that the kitty could be mistaken for a teddy if not for the whiskers, if the ears were more cat shaped (but still soft so not a hazard to the babies eyes) then it would be perfect.
They are soft and make a pleasing sound on movement, not to harsh but noisy enough to entertain a young baby.
They normally retail at a price of £9.99 and their site sells a range of other products as well, from buggy accessories to towels and their award winning baby carriers to changing bags.

I did this original review before my little girl was born but she was very fond of them and they brought a smile to her face. I can't remember at what age her hands were big enough to hold the rattles as a whole but they are still good to grab and touch and for you as a parent to entertain your baby with.

Several months later (2011/2012) I was lucky again and received a voucher in a baby&pregnancy magazine for another lovely item from Mabyland at a greatly reduced price, one of their musical dolls. I chose the teddy character this time. 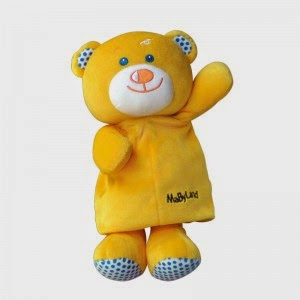 It is a lovely bright soft toy with a lovely tune ('Give a little whistle') which comes on by pulling the string and pulling the doll to it's full length. As the tune plays the doll shortens up again. It is nice to have a change from the usual lullabies and the pull mechanism means there is no need to buy and replace batteries.
You can hang it from your babies cot or pram and it's great for soothing them. My little girl loved musical toys.
They are currently available for £15.99 and also come in the same range of characters as the peg rattles. 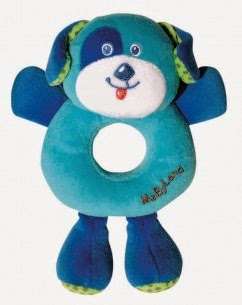 If that wasn't enough I got lucky a third time during another competition, which I think was run by a different site and we won one of Mabyland's round rattles. I chose the character we didn't have yet - the dog. Another lovely product, bright, soft, larger than the peg rattles and a different shape to grasp. Delivered quickly as usual.


The round rattles which again come in all four different characters currently retail at £7.99. I think that's a bit expensive for one rattle, however as my little girl is 3 now it's been a while since I've brought baby toys and after a quick research on the web it seems that is the average price for a rattle of this kind.

All the Mabyland toys I received have been very well made and stood the test of time and a fair amount of chewing! I definitely recommend them.