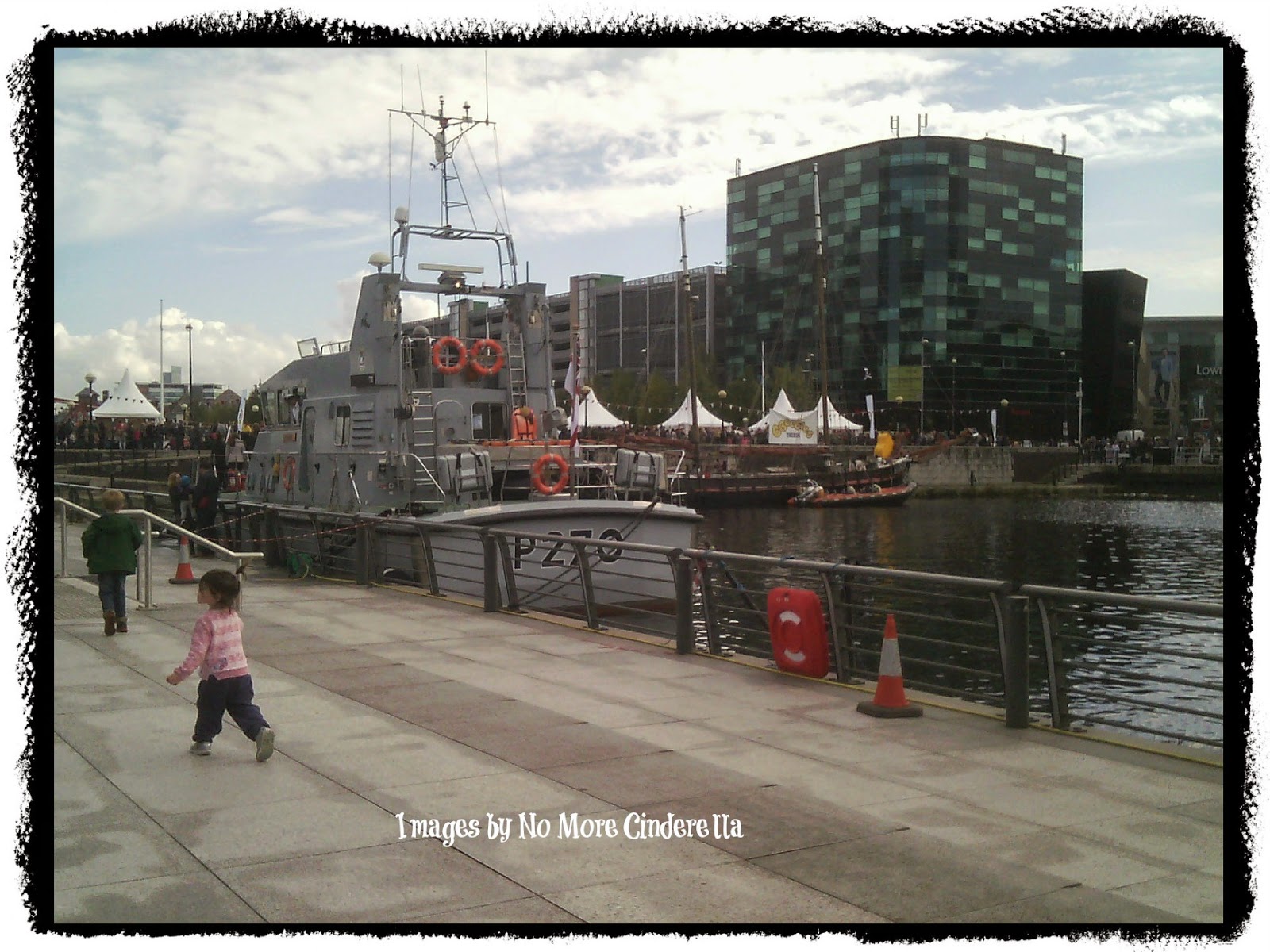 On Saturday the 11th, after a brief jab in the arm for my flu vaccine, I took advantage of the couple of days that the British weather decided to stop being so rainy and miserable and decided to head down to Salford Quays for The CBeebies Peter Pan Event. 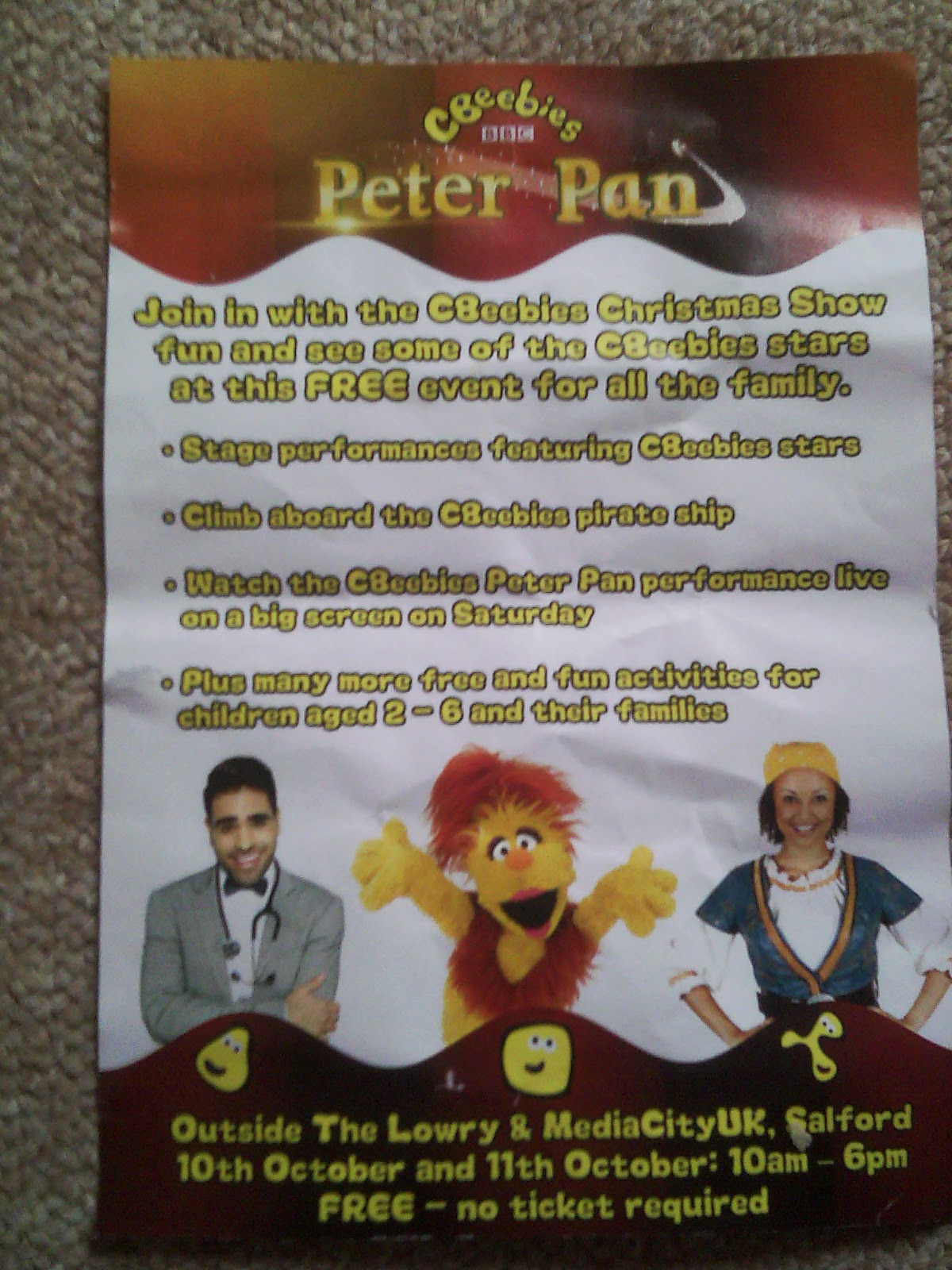 The CBeebies Christmas panto of Peter Pan was being held in the Lowry over the weekend, with rehearsals on the Friday and the show on the Saturday and a stage and free activities for young children were put on outside.

If I had known in advance about tickets and where the shows were held I would have entered to try and get them. However the outside activities sounded good fun and sites online advertised that Mr Maker, Sid Sloane and others would be on the stage and there would be a seated area to view the panto on the big screen!

We took the train to Picadilly and the tram like last time we visited the Lowry so it was pretty straight forward but a massive squash when on the tram as possibly every family with young children in Manchester had decided to come along to the event.


It was super busy and I realised just a bit too late that it would have been a better idea to go on the Friday. It wasn't overly a problem and I consoled myself with the fact the panto wasn't shown on the Friday so we would have missed out. However it turned out that they had changed their minds about the seat's, I presume as it was so busy, so there was nowhere to rest your legs or 'get comfy' as Dr Ranj suggested to view the panto. After having G on my shoulders for one of the previous stage performances I really needed a break so we couldn't stay to watch the show as obviously with everyone standing up she couldn't see unless I held her.
It also seemed really difficult to actually see much on the screen once the panto came on, possibly because of the lighting, so in general that was a bit of a let down. The other entertainment on stage was great however! 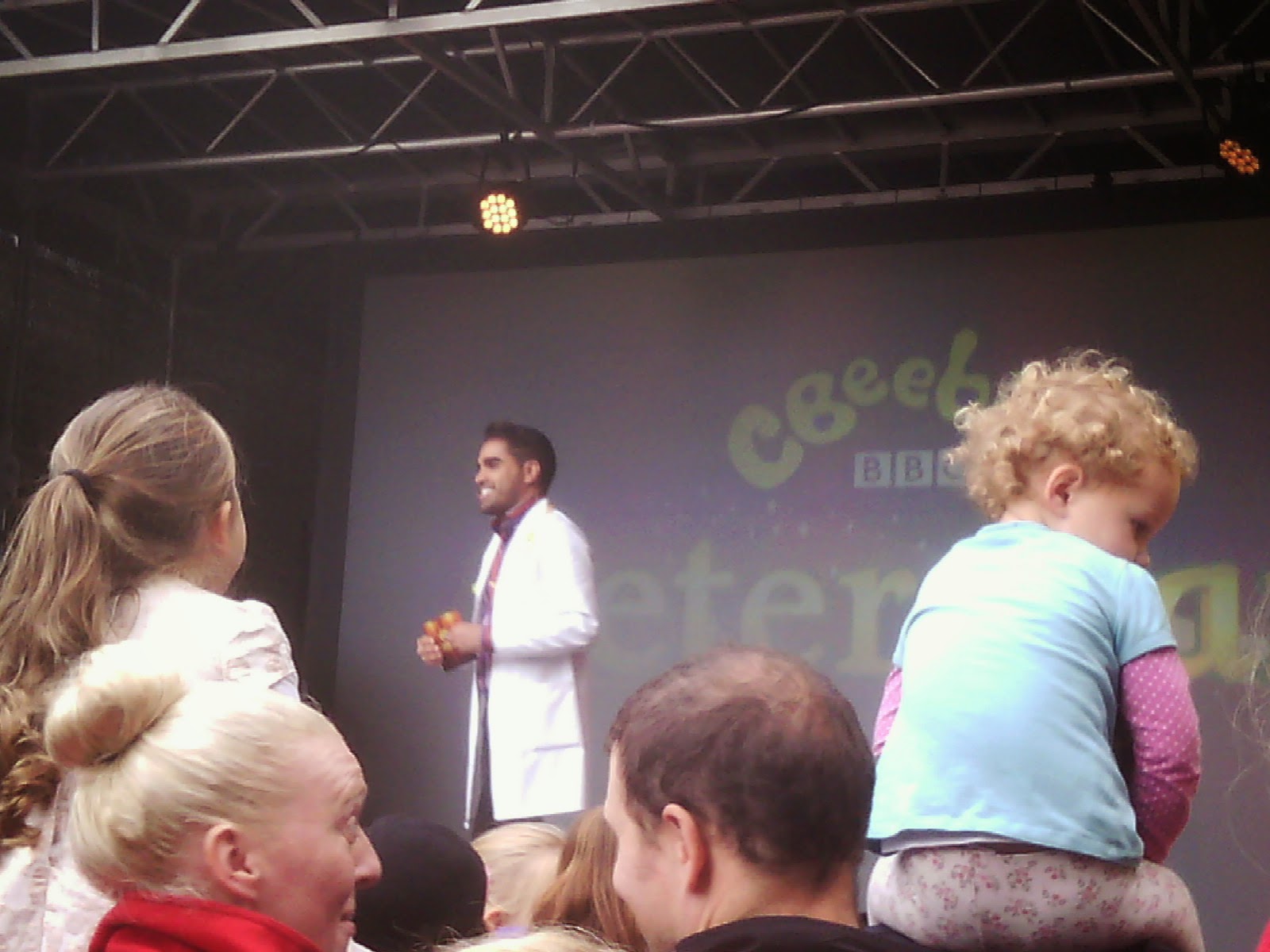 We got there for 12 and sadly missed Mr Maker as I think G would have enjoyed seeing him. We also didn't see Sid which mummy may have been looking forward too....
I think they either must have been on the Friday or earlier in the morning, I'm sure they would have been great for those that were there!
We did see the Rasta mouse and 'the easy crew' set twice with Dr Ranj busting some serious moves. G enjoyed this and despite being full of a nasty virus she was kept going by the excitement of it all. I moved to the front with her on my shoulders, possibly a little excited myself to see Dr Ranj.....you can tell the only TV I've really been able to watch the past couple of years is CBeebies!
There was also a Furchester hotel set due on stage at 5pm but that was too late for us, especially with G being ill, we needed to get home. I'd also been forwarned on the busy tram there about the rugby ending around 6 so wanted to be out of Manchester by then! 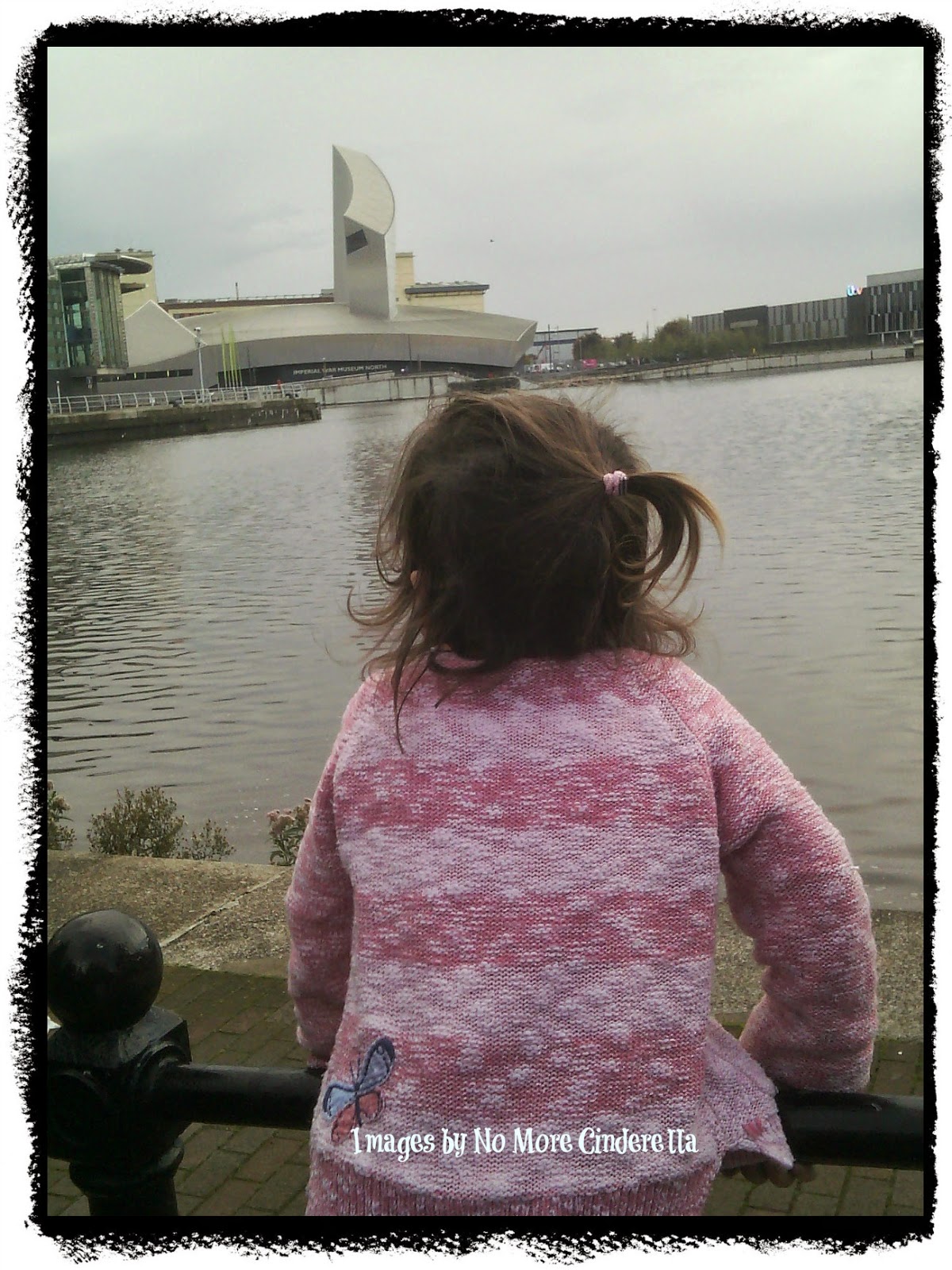 The pirates from Swashbuckle also made an appearance but at the time we had finally made it onto the CBeebies pirate ship. There were set times when you could queue for a quick look on board the Liverpool ship the Glaciere/Cbeebies jolly roger. Apparently there were story telling sessions in the cabin, I don't know when these happened but we missed them too! It was quite a long wait in the queue and G announced just before we were able to go on that she needed a wee! Luckily she managed to hold on. We had a quick look round but G really wanted to stay on longer....such a long wait then a quick rush round. It was still great that we were able to go on. 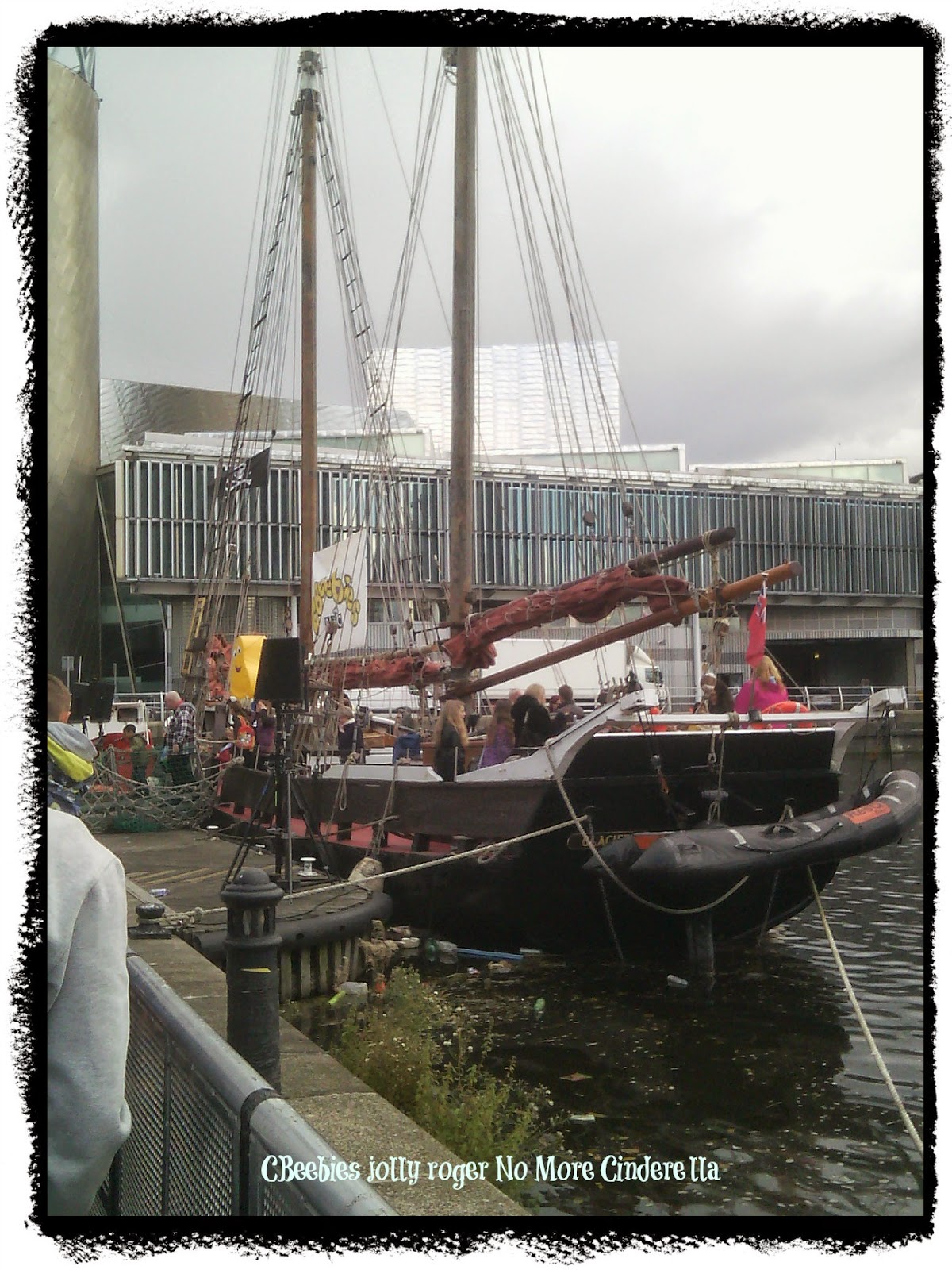 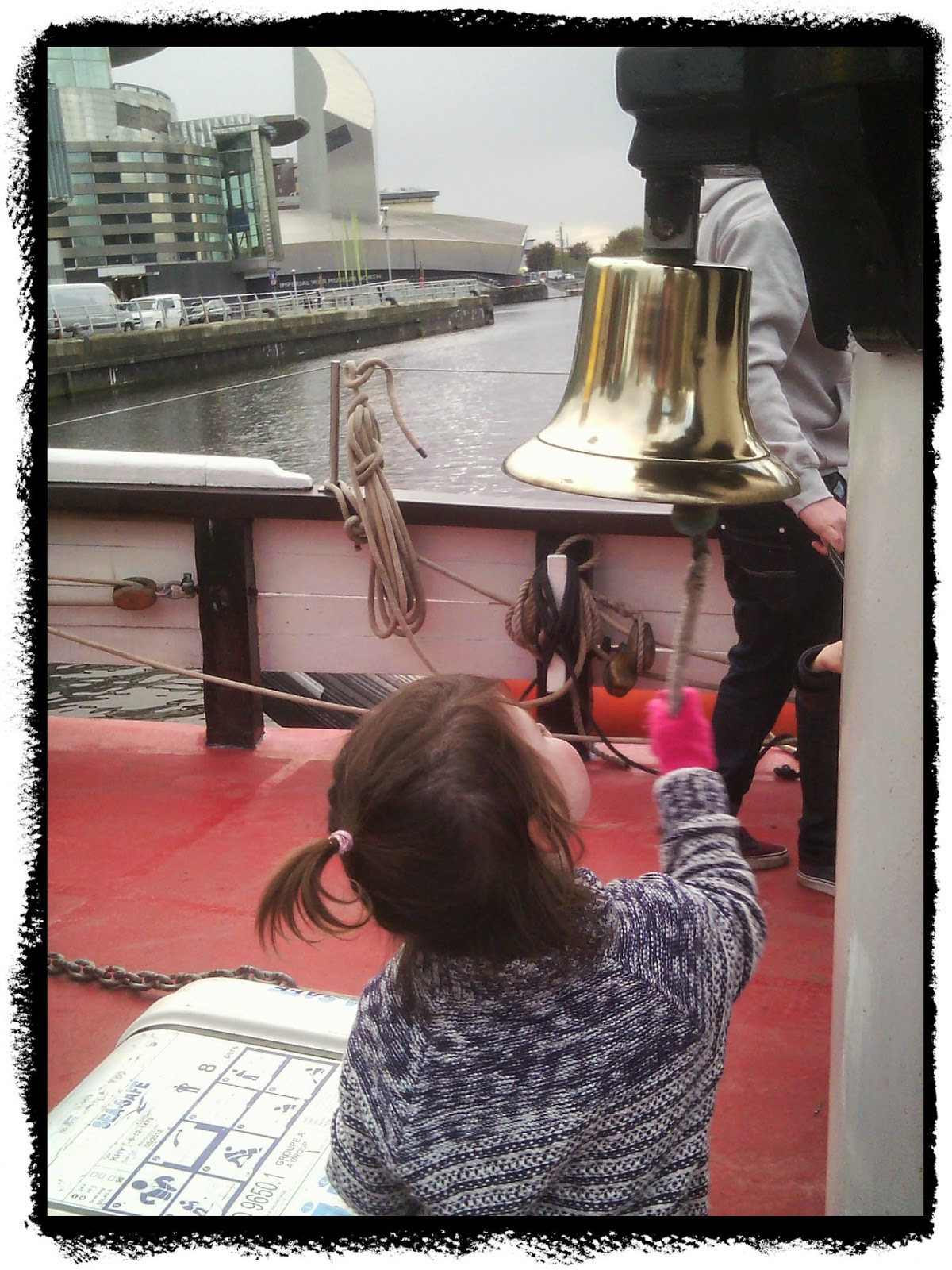 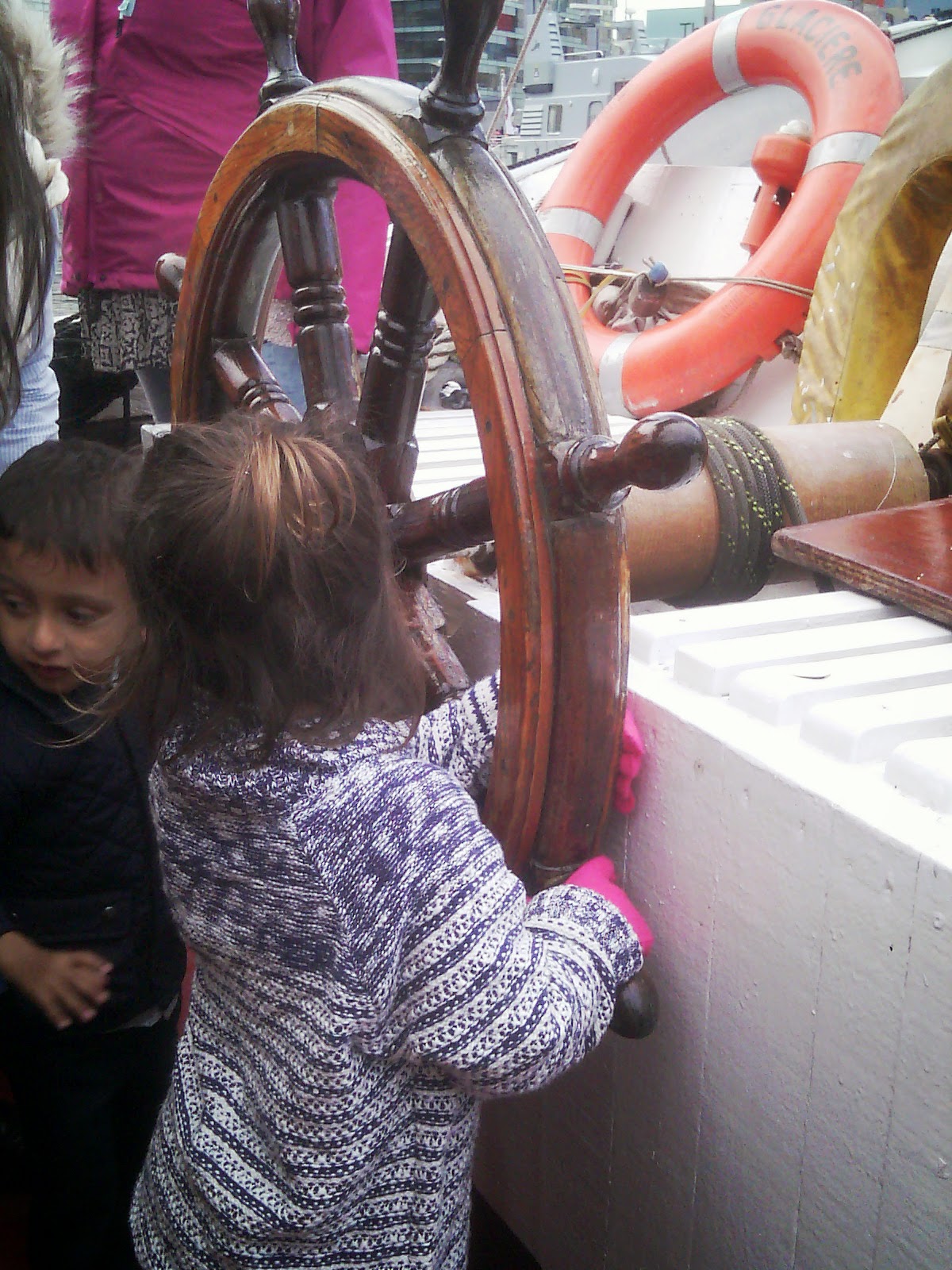 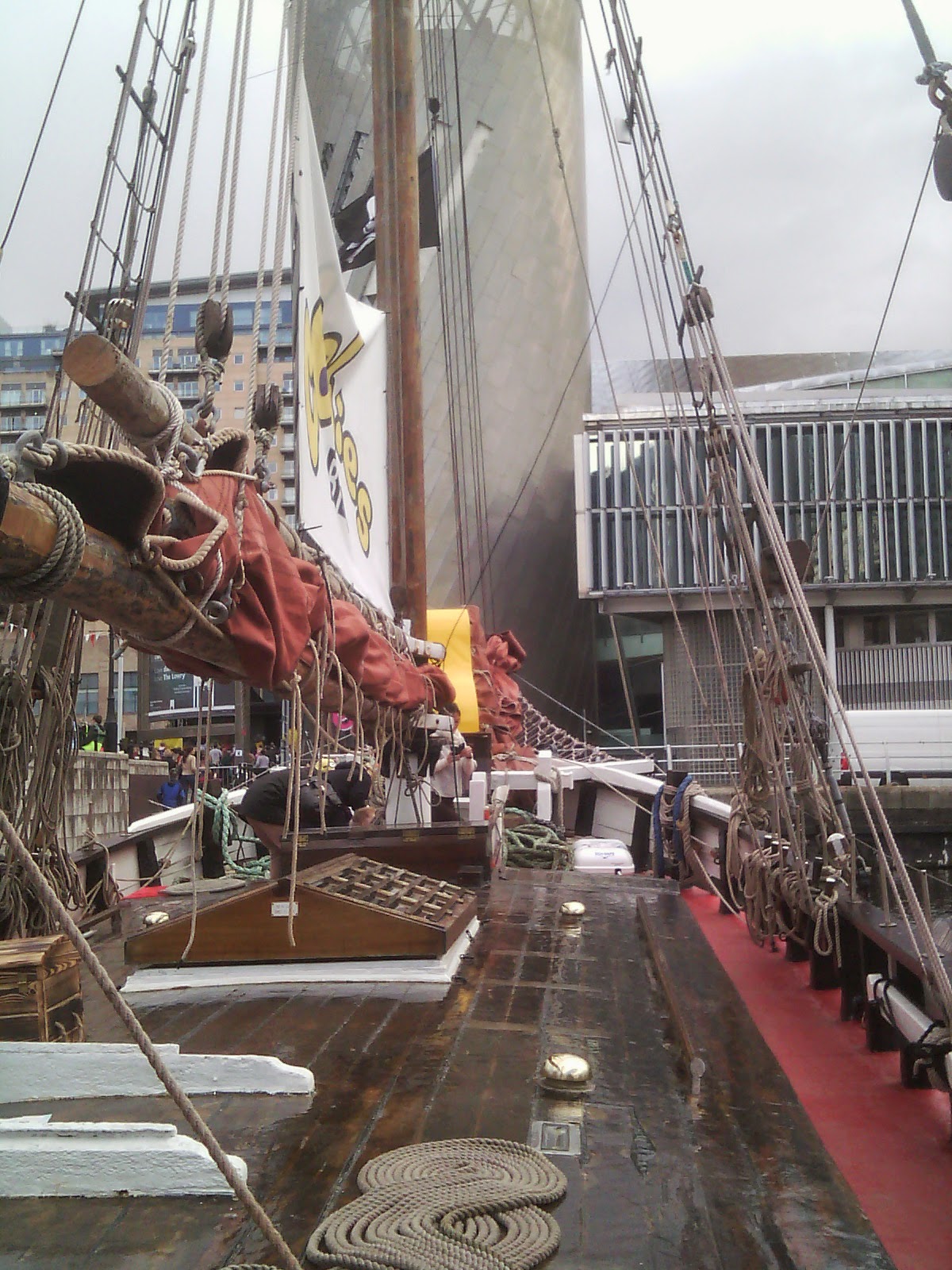 Just before then we had queued for a while to go into the Tree fu Tom tent where there were activities such as making a bug hotel, apple printing, 'guess the veg', decorate a leaf, make a cress pot, looking for pond life. G took part in all of these and enjoyed herself. We would have stayed for longer but I had to rush her out just as she was enjoying herself cutting out a leaf to queue to get on the boat so that she didn't miss that!

There was also apparently an area where they were doing 'sea themed singing and story telling with musical instruments' I'm sad we didn't spot this anywhere whilst we were there.
We did go into a tent with Maths activities where G enjoyed digging around in buckets of sand and counting or mainly just discovering objects in them. She also had a play in the Science tent with the tubs of water with objects that either floated or sank. We also queued to play hook a duck, again which was very brief due to the day being so busy and G was given a bag of duck feed which we will be using on our next park visit. I am always meaning to go and get them some proper food from home bargains but it always ends up being old bread, which apparently stunts their growth! So it was nice to get this.
There was also a treasure hunt to take part in. I did see some people with maps but as I wasn't sure where to get them and there was other activities going on we didn't take part in that.

After looking online after I was gutted to see we has missed some Peter Pan themed under fives special dance and movement sessions in the Lowry on the Friday. They sounded wonderful.

I really should have done more research before the event instead of just going off a vague media release and this post wouldn't have been mostly about all the things we missed!
However it was great considering it was free and although I don't think G has ever seen Rasta mouse she enjoyed the songs, seeing the characters and seeing Dr Ranj.
It was also great that they had set up area's to park your buggy and leave it. It definitely made things easier.

Did you go to the event? What did you think and what did you and your children get up to? 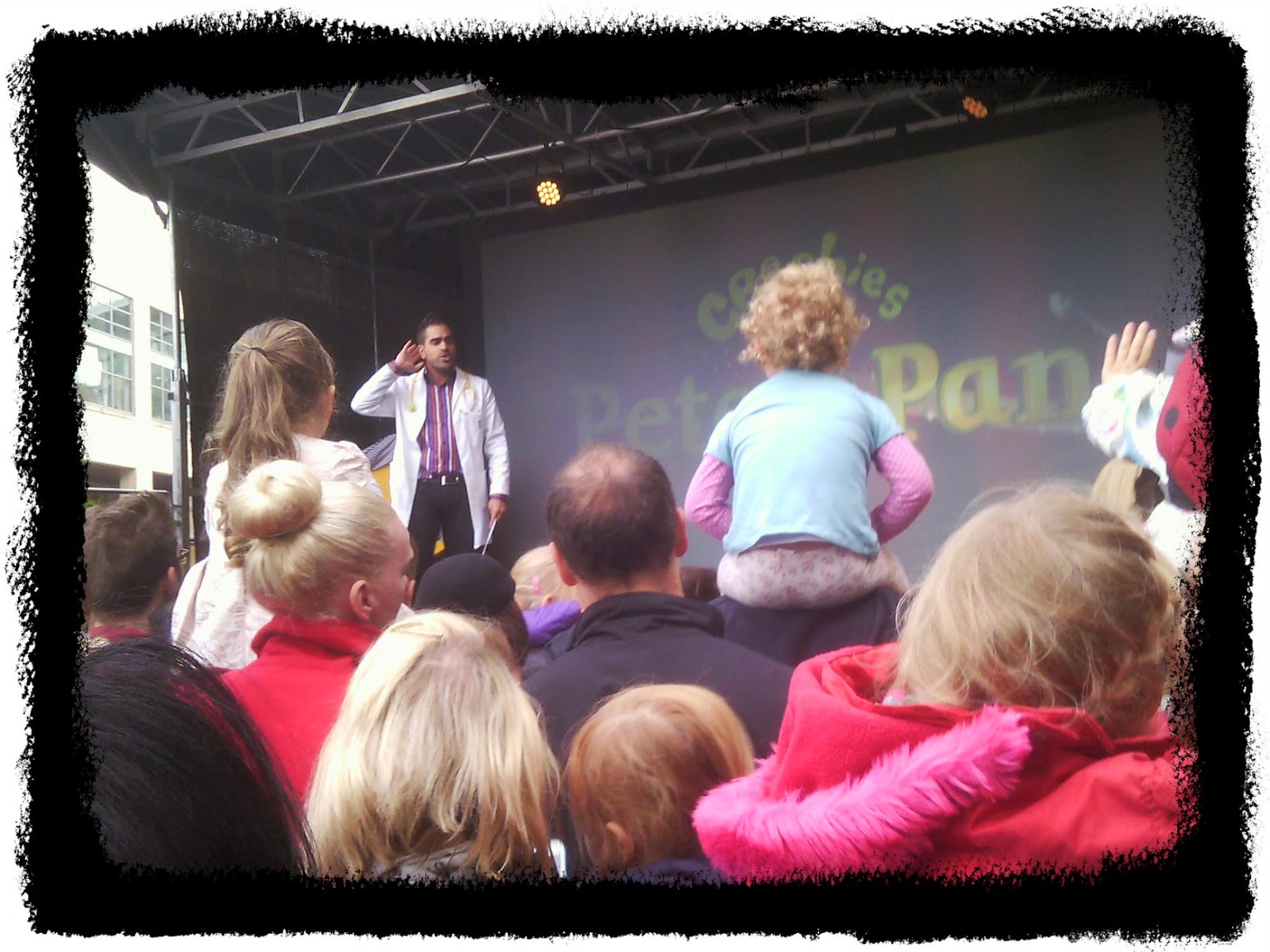 Email ThisBlogThis!Share to TwitterShare to FacebookShare to Pinterest
Labels: Cbeebies, Days Out, Free Days Out, Salford Quays, The Lowry