Meet Bella - how she adopted me 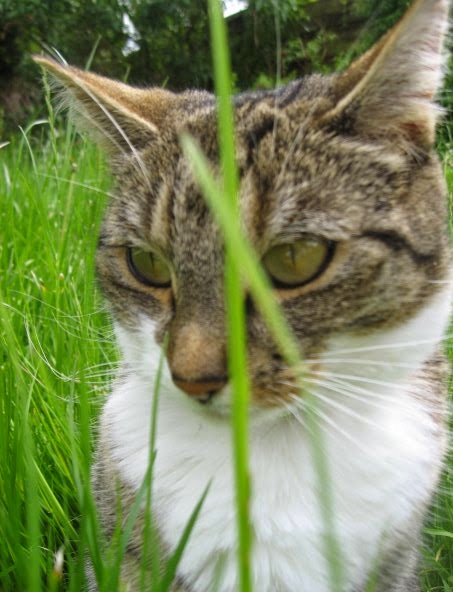 Let me introduce you to my cat Bella. She turned 7 at some point this year. That now makes her a senior cat according to cat food. I can't believe time has gone that fast. Sadly she's not a fan of children (she'd never scratch them or anyone, but as soon as she catches sight of children she bolts) so all my very loving but fairly loud and bouncy 3 year old ever see's of her is the blur of her tail as she scarpers!

Here is an edited version of a post dedicated to her from my previous blog:

Bella strolled on into my life right through a kitchen window in Summer 2007 and has been a part of it ever since.

Bella is my seven year old female tabby cross who thinks of me as her mummy cat and means the world to me.


I'd always wanted a cat, specifically a kitten. My dream was to have a ginger tabby which I would call Muffin. I don't know why that name, but that's what I came up with as a child. My brother wanted a silver tabby called smokey and my mum a tortoiseshell cat. That was our 'dream', but as we didn't have the money or the space we never got them.


I moved into my third and final home in Liverpool, where I studied for Universirty, at the end of August in 2007.

We had to move in by a certain point, and also as I had a lot of exam revision to do which I found hard to do at home, I moved back to Liverpool a couple weeks before uni restarted.

Being in a new house all on my own was pretty lonely and I had been suffering from depression and finding life difficult ever since I became long term ill at 19.
I'd only been there about a day when I heard a mewing in the back yard. I opened the back door to find a small, young cat demanding something, I didn't know what. I was very patient and quiet and she came to me. She was very friendly and seemed to love attention once she knew I was not something to be scared of.
She wandered off after a bit and I got on with things. Later on she came back, so I figured she was a local cat, but then the next day she returned mewing outside the kitchen window really wanting to get in.
I gave her a tiny bit of milk as she seemed hungry, but only a little as I was sure dairy milk was not actually very good for cats.

Besides the distraction of the young cat, once I'd organized my stuff, I had revision to get on with, but at one point feeling a bit down and tired I had fallen half asleep on my notes. Half awake I was suddenly aware of footsteps coming up the stairs, which scared me. My brain didn't have time to rationalize that they weren't loud enough to be human. I lifted my head up to find this cat standing over me on my bed and wanting attention. 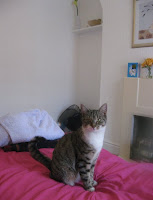 It was seeming like she didn't have a home, but I wasn't sure and just thought it was nice to have a friendly neighborhood cat who came to visit. However when inspecting the back yard a couple days later I found a cat food bowl and water bowl. It was starting to make more sense why she seemed to think this was her home, it looked like she had been left behind by the previous occupants.

When my friend moved in we decided we better start feeding the cat and go about finding if she did belong to someone in the area. It was looking unlikely though due to my findings and the fact that even before feeding her she would meow constantly outside the window to be let in. I took to leaving it open for it, possibly quite unwise living in that area of Liverpool (especially considering events to come).

After taking her to the vets we found out she was a girl as some friends had suggested after meeting her. She was in perfect health and only a couple of months old.....so still a kitten. She had no chip, but she had been neutered.
We took to asking neighbors and looking out for lost cat posters, but no one seemed to be missing her, so finally we decided to look after her.

We had to come up with a name we all liked. My friends partner and I both thought of Bellatrix for some reason, but even though it sounded good, this kitten was anything but evil!
The three of us decided to shorten it to Bella.

I had some funny moments with her at that house such as opening my desk drawer to get some paper only to find her curled up asleep in it.
Trying to revise but her wanting attention so she would come and sit right on top my text books or notepad so she could be stroked.
She also loved to attack my pens.

However we did start to get difficulties.....she didn't like being shut out of rooms so would make a lot of noise or try and scratch to get it. This was at nighttime as she wanted to be in my bedroom. Often I would leave my door open for her, but then I didn't have my privacy.
She also made a couple of scratch marks in the house, which was a huge worry as we weren't actually allowed pets and had a big deposit on the place. When someone from the estate agents did need to come round to see the house I had to go to the lengths of hiding her at a friends house for a couple of hours!

To try and stop her coming upstairs at night and waking us and trying to get in my room (which somehow she would manage even if the door was shut) we kept her in the bathroom a couple of nights. She hated this however and one morning we came down to find she had ripped some of the floor up.

Jen was horrified and decided she had to go. I could understand because it was going to be very hard to fix and hide and there was the potential she would do more damage. We would be in a whole heap of trouble if they found out we had a cat and definately couldn't afford to lose the huge deposit. At the same time though I was hurt, angry and heartbroken. We'd had her for several months now and she was very close to me.
When the R.S.P.C.A worker came to pick her up Bella got upset straight away. I'm sure she could tell something was happening and when she got near her she was very on edge as she was at the time very frightened of other cats and the worker smelt of them.

I was so so upset losing her and thinking I would never see her again. I had really bonded with her Bella and she had helped as a distraction with the difficulties I had living my life due to my illness.

Luckily my sister came to my rescue when she saw how much I was missing her and decided in the meantime she would get Bella back and she could live at her house, until I was in my next place. I am so grateful to her for this, as otherwise Bella would not be in my life now.
She also helped Bella with some health problems, as she occasionally had been getting an upset tummy and it turns out she has cat IBS, so now has special food to help her with this.


I lived with my sister for a couple of years after university due to my health condition but then moved to Leeds taking Bella with me. She's still with me now 4 years and a child later and back in Stockport. She's an irreplaceable part of my little family.