Around May 2011 we were very lucky to win a whole box full of Munchkin bath toys. At this point in my life I was in the midst of a complete breakdown due to terrible issues in my personal life so I didn't get to do a review.

I don't have shiny photo's from when we had the products all brand new and in packaging or photo's of my at the time 10 month old exploring her new box of excitement but some of the products
have lasted until now, over 2 years later and have been great toys for my little girl so I wanted to share my views.

Here is what were lucky enough to win:

Shampoo Rinser - they no longer do this version and have replaced it with a new model. After using this for 2 years we had to throw it out due it getting mouldy round the rim. We got a lot of use out of it but I think the newer version without the separate section is less likely to collect mould. A great idea to make washing your little one's hair a bit more stress free. G enjoyed using it herself sometimes for just pouring water or trying to do her own hair. 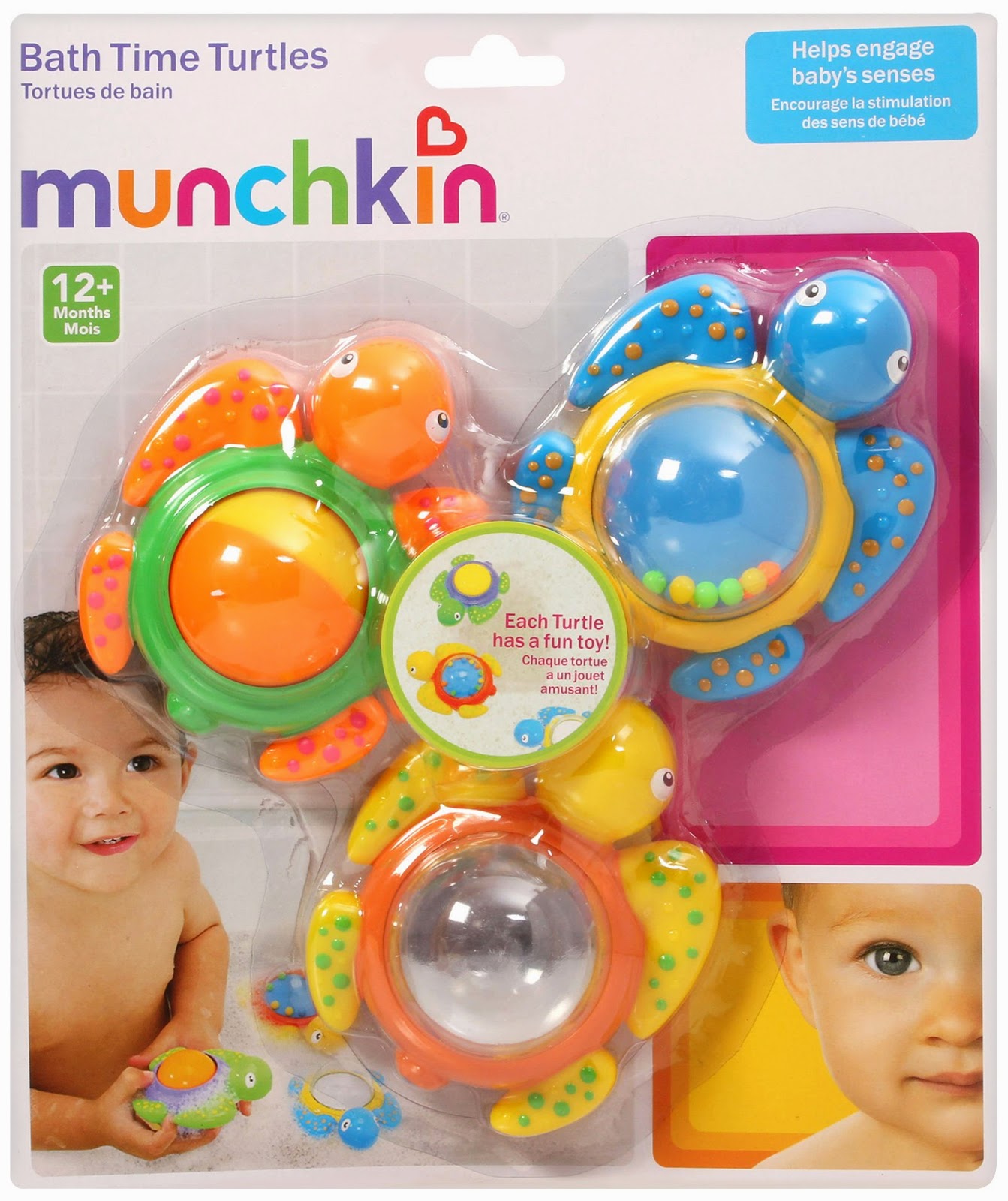 As a baby the bright colours and rattle sounds from these kept G busy. As she got older she gained more interest in the different features of the turtles (a mirror, one has beads to shake like a rattle, the other has a spinning middle section) and then at some point worked out they can stick together in a line. she still plays with them now. These are suitable from 12 months plus but G was fine with them from 10 months. 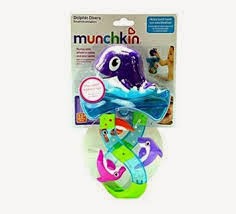 G has loved this. Your baby/toddler fills the whale with water, pours the water in through the top which makes the dolphins wheel spin round. At one point we had to start putting the toy at an angle or it won't spin round. G has loved just playing with the whale on it's own and she started to use it to wash her hair with at one point. A great idea for a bath toy but the problems with motion can be a bit off putting. 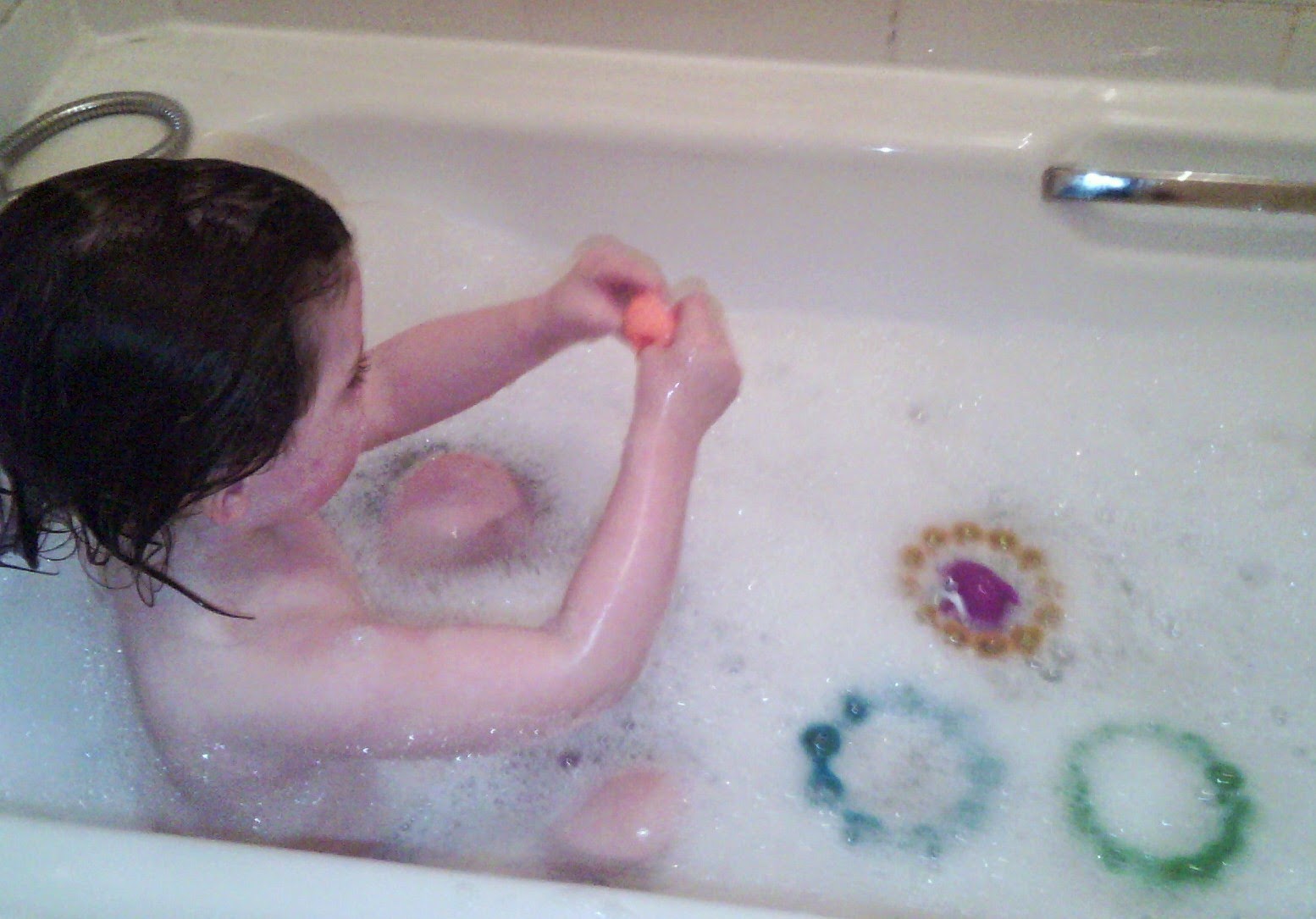 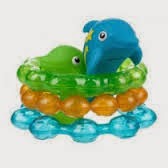 Daredevil dolphins Bath toy  no longer on their website so I assume not produced anymore. We still have the hoops but at some point the dolphins got mouldy. The dolphins are squirty toys that can fill with water and be played with like that or you can dive them through the hoops. A great bath toy. G still happily plays with the hoops, wearing them on her arms or feet or balancing them on her head! We could do with another dolphin but she gained one replacement from the mermaid toy we brought a few months ago. 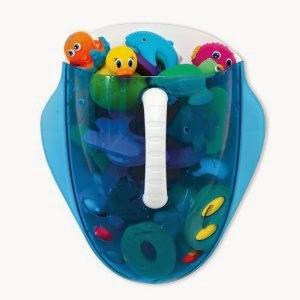 This sticks to the bathroom wall with double sided sticky tape. After moving house and having to pry it off one wall it wasn't sticky enough to stay on the new bathroom wall with all the toys in. I've still yet to find any proper thick, strong enough double sided tape to stick this & her name plaque for her room back up. This is a great space saver though so now I've reminded myself I better have another search for some tape. It's great that you can just scoop them up and it drains out....though as mentioned the squirty toys can get mouldy so with those you can't really just scoop them up and be done with it. They need a proper squeeze out or they get mouldy much too quickly. Any others toys though scoop away! I would recommend this. 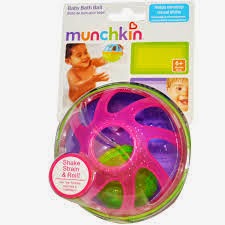 She still uses this too. Lovely little ball that 'rains'.
She likes to pour it over her head sometimes or other wise just fill up make it rain out water over and over. Good sensory play. Listening to the sound the water makes when 'raining'. Feeling it rain out on her hands. Also can be shaken to make a noise/act as a bath rattle and spun around in the water too. This is a great one for young babies. Suitable from 6 months plus. 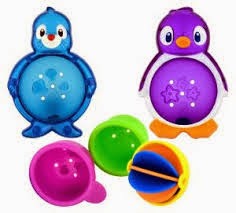 
She loves the two characters of these. Mummy 'brought them to life' once by making them jump up and down around the bath tub and made appropriate noises and dive into the water and after the first performance she demanded that every single bath time for quite a while.
Bright and colourful. Lots of fun scooping water, pouring out into the bath or into one of the other pieces. Making the little ball spin around by pouring water on that. Lots of activities for your little one with this set. Good for developing motor skills. 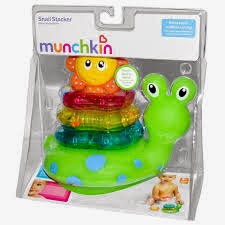 
We still have all of this set except the squirty flower that went on the top. That went mouldy like the other squirty toys at some point too. We found the snail did not balance/capsized when the flower was placed on the top anyway but it was still good fun for G just using it as a squirty toy. Learning how to fill them up and squirt them out by herself.
Two of the rings themselves can be filled with water and pour out in a different way. The top stacker has 3 colourful beads on that G used for counting when she was just beginning with her numbers.
With it being a stacking toy it was good for very early math skill for learning about the sizes and order. All that I really want out of a bath toy is for her to have fun though.

So as you can see G was a lucky pup winning that haul from Munchkin. It was her 1st birthday a couple of months after we won these and one of my work colleague/friends very kindly brought her the Bath Dunkers set.
We hadn't asked for anything specifically but she had spotted it in a shop and it stood out to her. So much so that she brought a set for another of our colleague/friends who had been pregnant at the same time as me and has a little girl the same age. 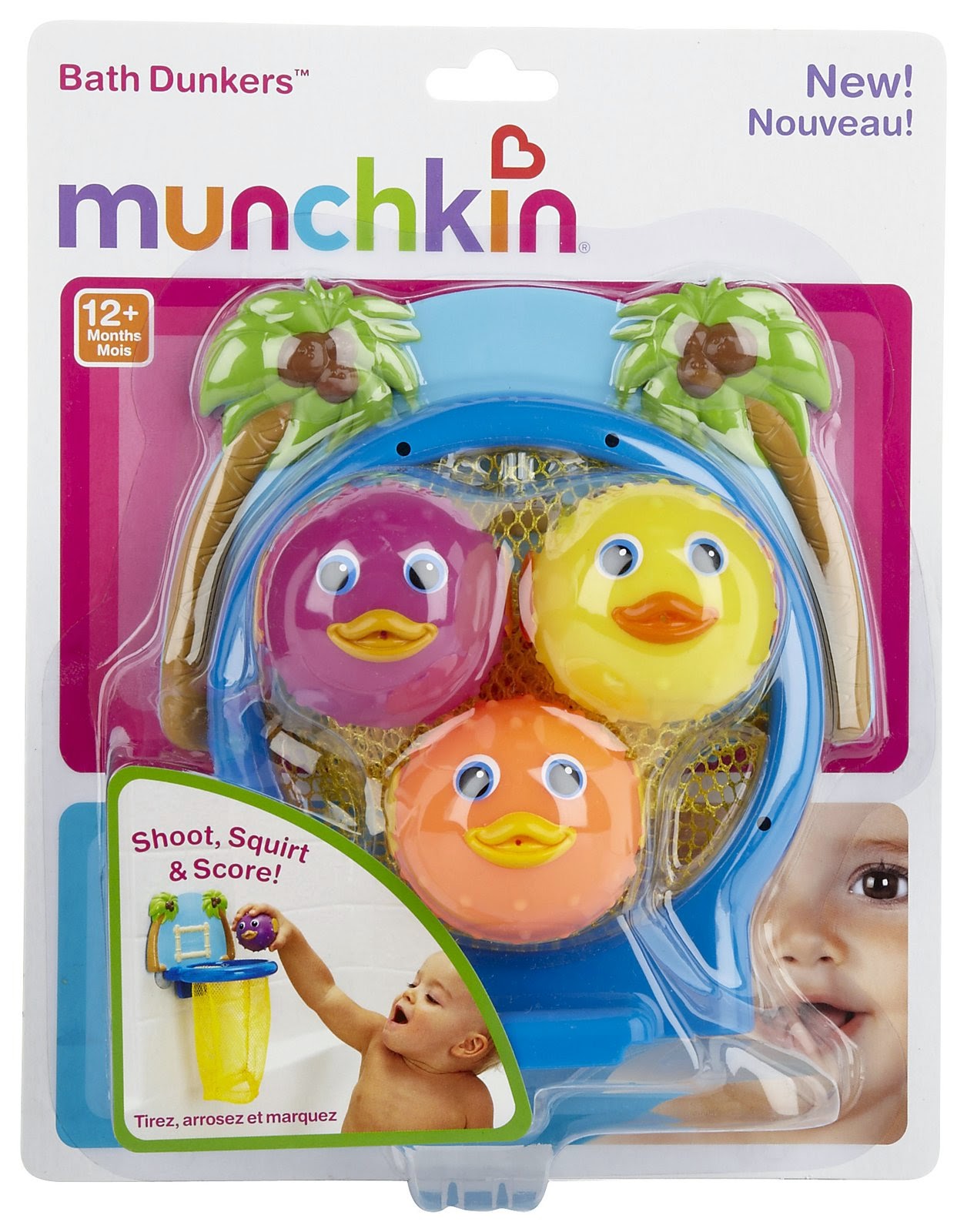 G loved this. I think it was/has been her favourite bath toy. Sadly we don't have it anymore. One puffer fish was thrown down the toilet by madam when being a bit of a monkey. Another ended up splitting in two. I'm not sure how or why. Part of the net started pulling away from the side. I don't think this was a fault of the toy, I think it was because it was used so much. G would put all of her squirty toys in the net and the dolphins would sometimes get stuck leading to her tugging the net a bit leading the gradual wear and tear.
She still asks about this toy so maybe Father Christmas will gift her with a new one if she's a good girl.
It's good for developing spacial awareness skills but most importantly very fun. The puffer fish could be used separately just as squirty bath toys also.It's suitable from 12 month plus. 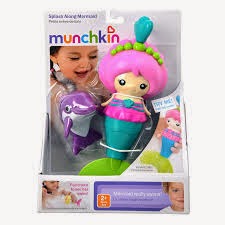 About a year ago we added to our munchkin collection (partly to replace those that had to be thrown out, partly as mummy thought this looked great and it was in a baby event at a local supermarket) and purchased the Splash along mermaid.
Your child pulls the shell/star/crown at the top of the mermaids head and the mermaid swims, her tail propelling her through the water. There are two designs of this. The pink mermaid with a purple dolphin squirty toy or a yellow haired mermaid with an orange starfish squirty toy. I went for the one pictured to help replace one of her dolphins. A lovely toy suitable from 18 months up so great for older children in the bath.


I've found all munchkin bath toys to be great quality and they come up with original products.
The number one critic has loved them and still does even now she's turned 3.
Even though several of the toys I've reviewed are no longer available on the Munchkin site you can still find many of them for sale elsewhere on the internet. I always shop around to make sure I get the best price.

Has your little one had any munchkin bath toys? If so which did you rate the highest?