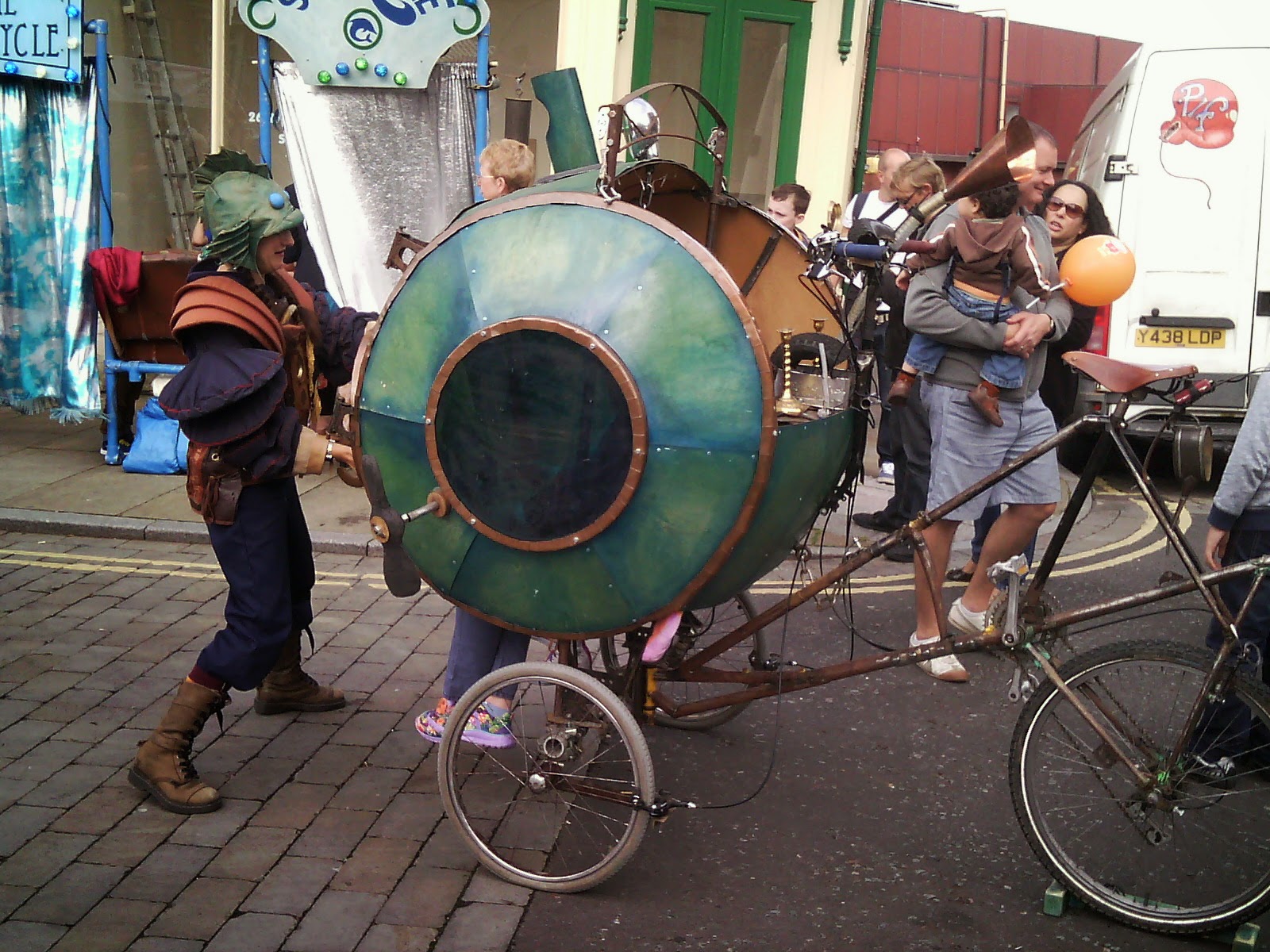 Stockport had their Fringe Festival the last weekend of August. It started Friday evening with a great mix of food and music.
I didn't have the option of going on Friday evening and Saturdays weather was mixed, so we ended up popping in to see what was going on on the Sunday.
One of the attractions we came across in the Market Square was Pif-Paf Theatre who were putting on their fly cycle and submercycle show.

Here's what their wesbite says about the show:
Come away with us on a journey of your wildest dreams, aboard our famous traveling machines, The Submercycle and The Flycycle!
Choose a traveling companion, find the Departure Lounge and we’ll take care of the rest. We take two at a time and dress you in hats so sublime. With Captain Bigshot, you’ll fly up up and away, crossing continents in turbulent adventures, or dive under the sea with Captain Calypso, encountering denizens of the deep. Under the sea or high in the sky, all ages are welcome.Together we’ll weave unforgettable stories.
This Cycle based Street Theatre is suitable for most weather conditions outdoors, or indoors (in a large space) these travelling machines are a guaranteed crowd puller. Check out what people are saying. 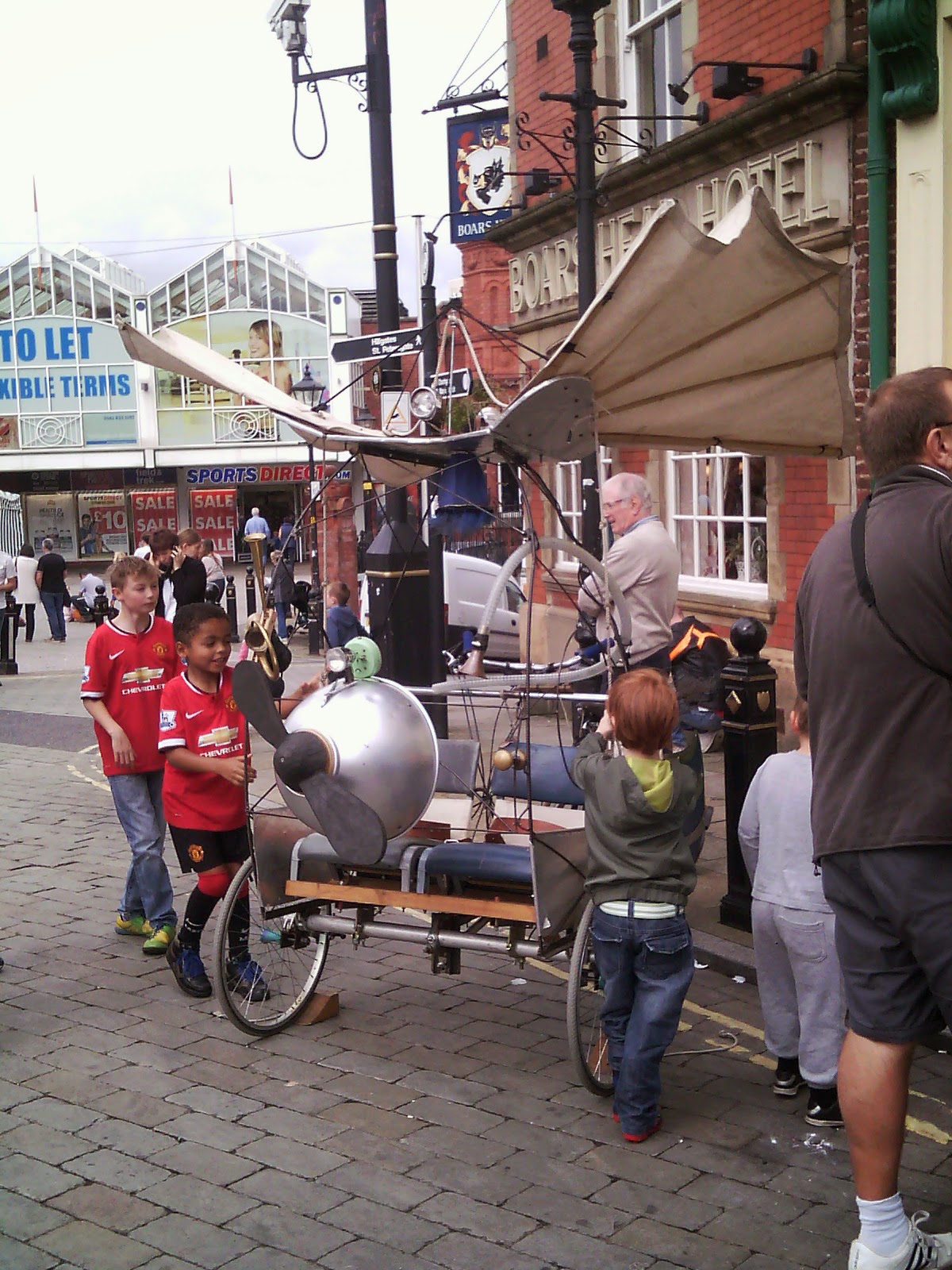 The vehicles/contraptions looked fantastic and were parked by some flashy blue curtains. We queued up for the Flycycle and G went behind the shiny blue curtain to chose some dressing up items. She shared with an older boy called George. They both had to decide where they wanted to go in the world and what they wanted to see. G doesn't know much about other country's yet but she decided she wanted to see a Zebra and George wanted to see some fish. I don't think G realised at the time that it was pretend. As you would at that age she thought the Flycycle was really going to fly and she was really going to see a Zebra. It was a lesson for the imagination!


Once they'd had time to dress up and decide where they wanted to go an air hostess/assistant announced them on a microphone. She told the audience where the little travelers where hoping to travel through and then they walked through the blue curtain back to the public to 'board the flycycle'. 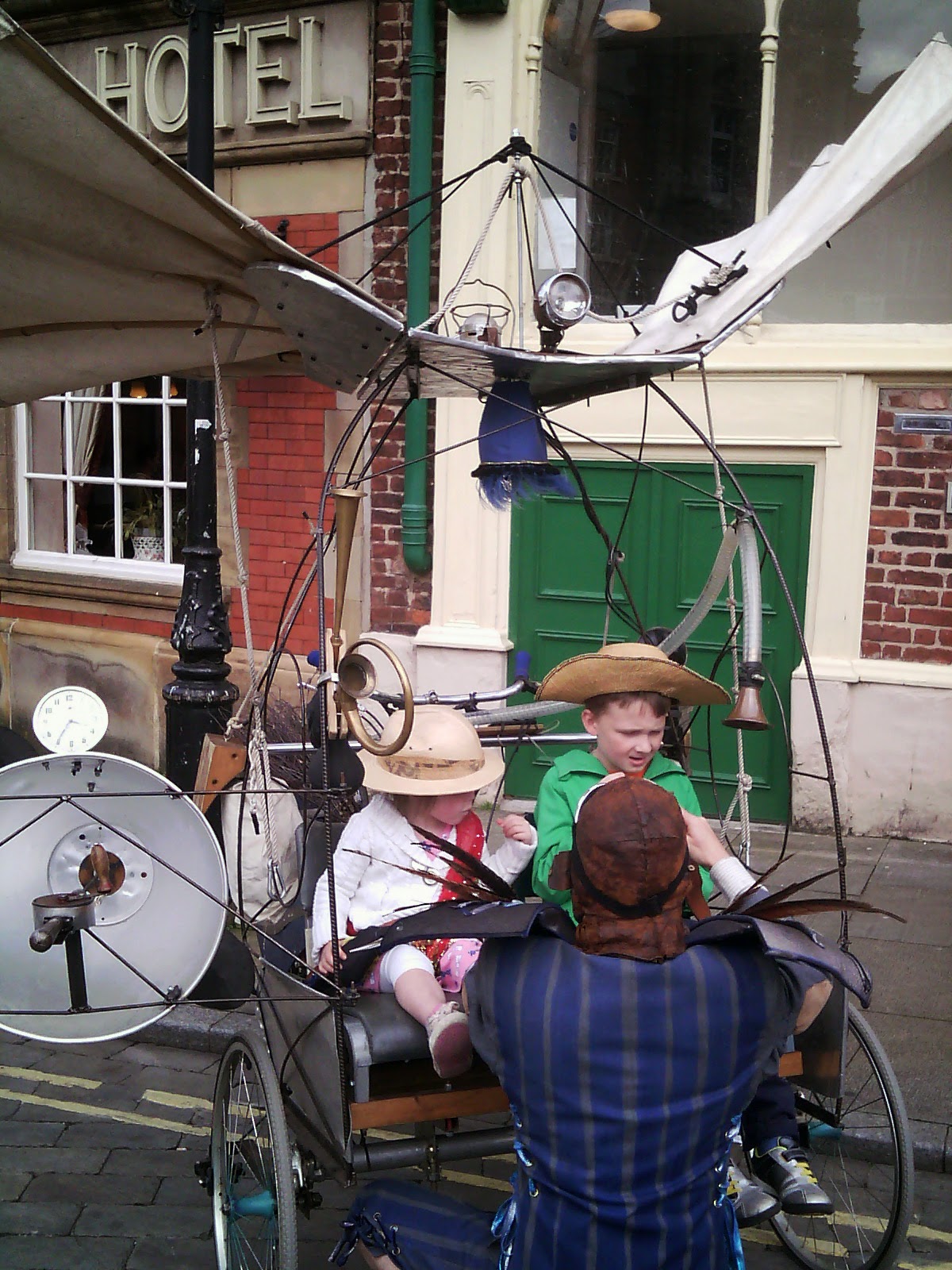 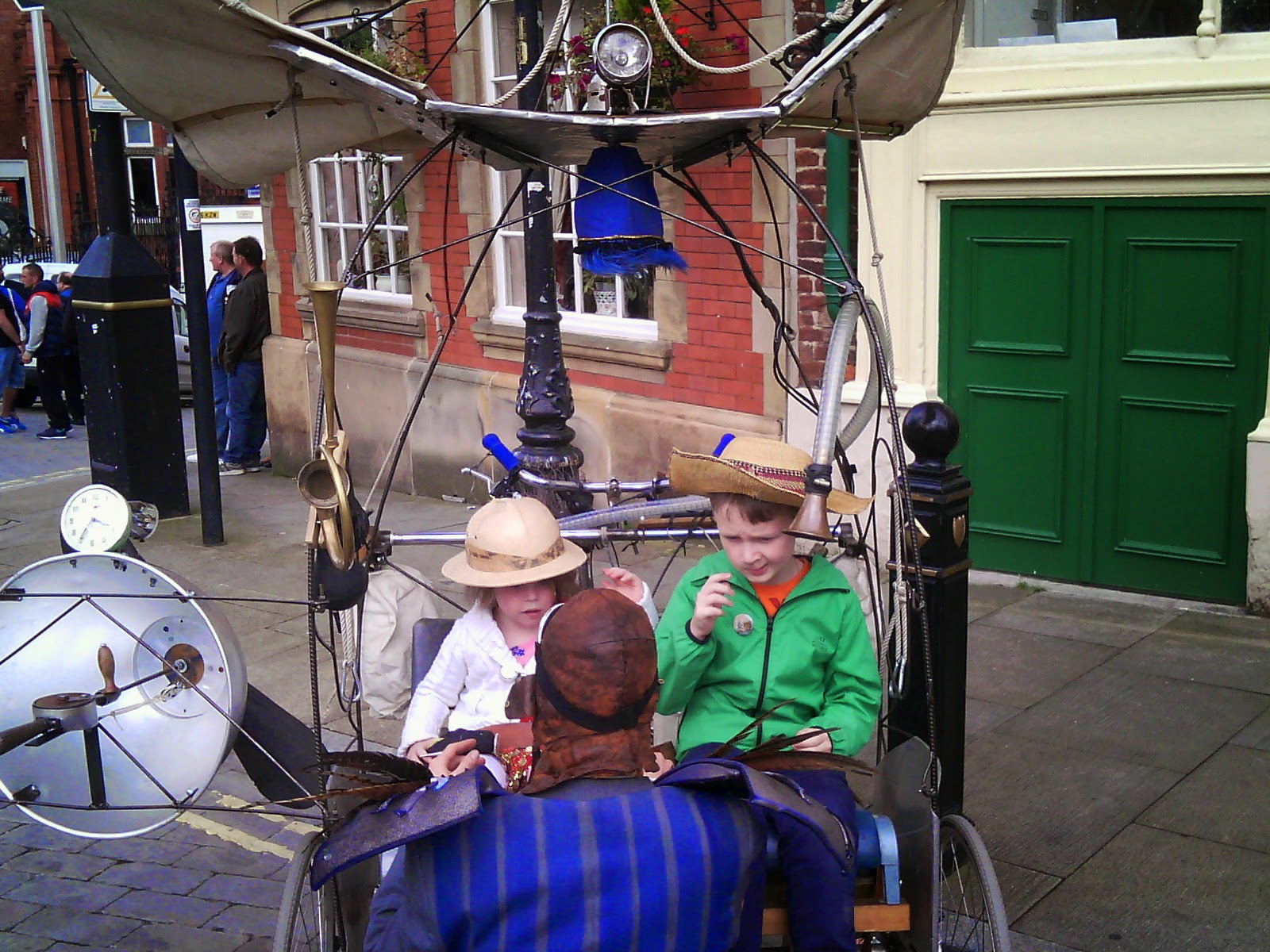 Above is Captian Bigshot helping them aboard and strapping them in. I think there was some kind of horn they could squeeze and a rope each side to pull on to make the wings flap as they went a long which looked great. G was a it too small to do this but it didn't bother her. 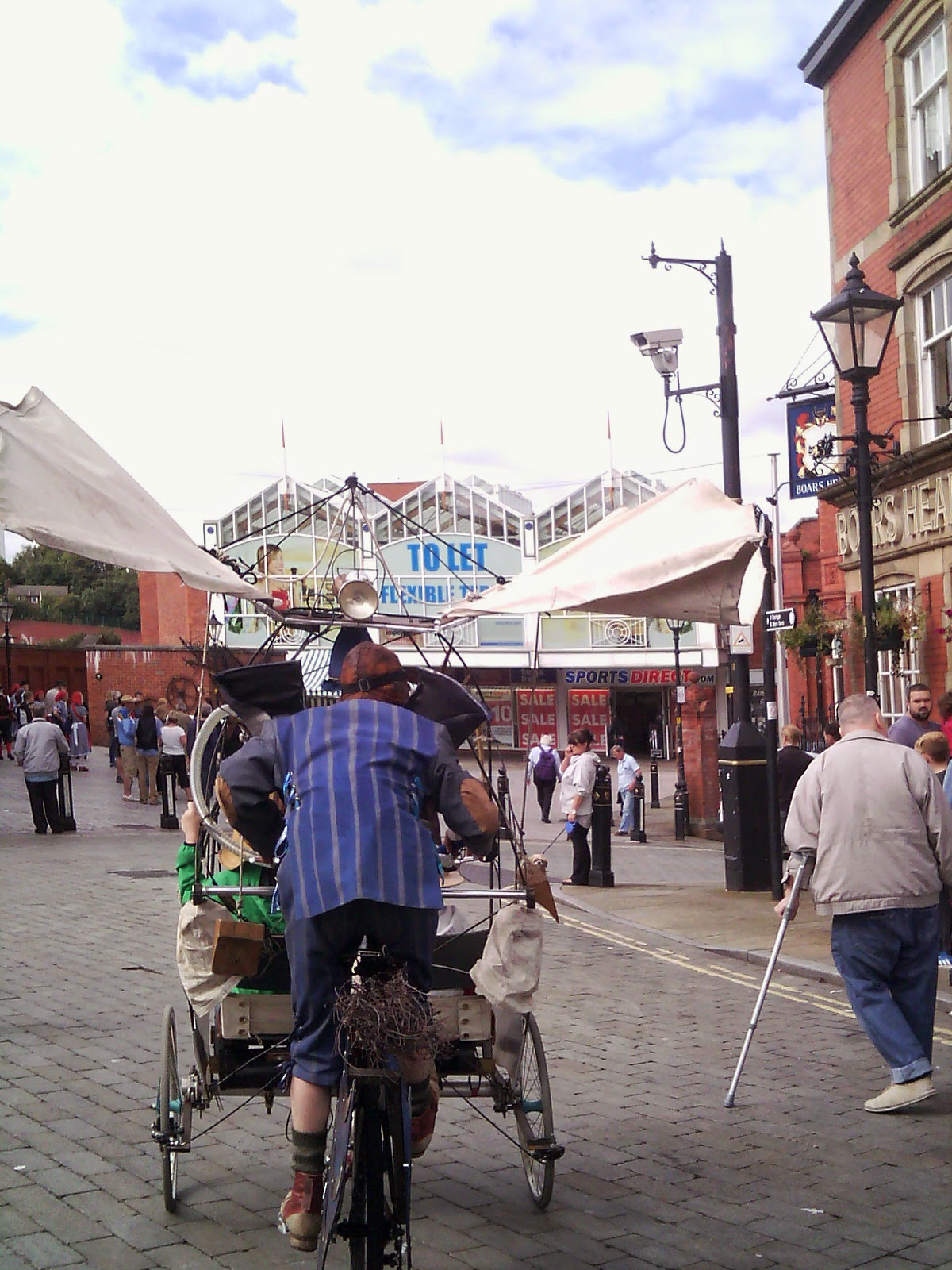 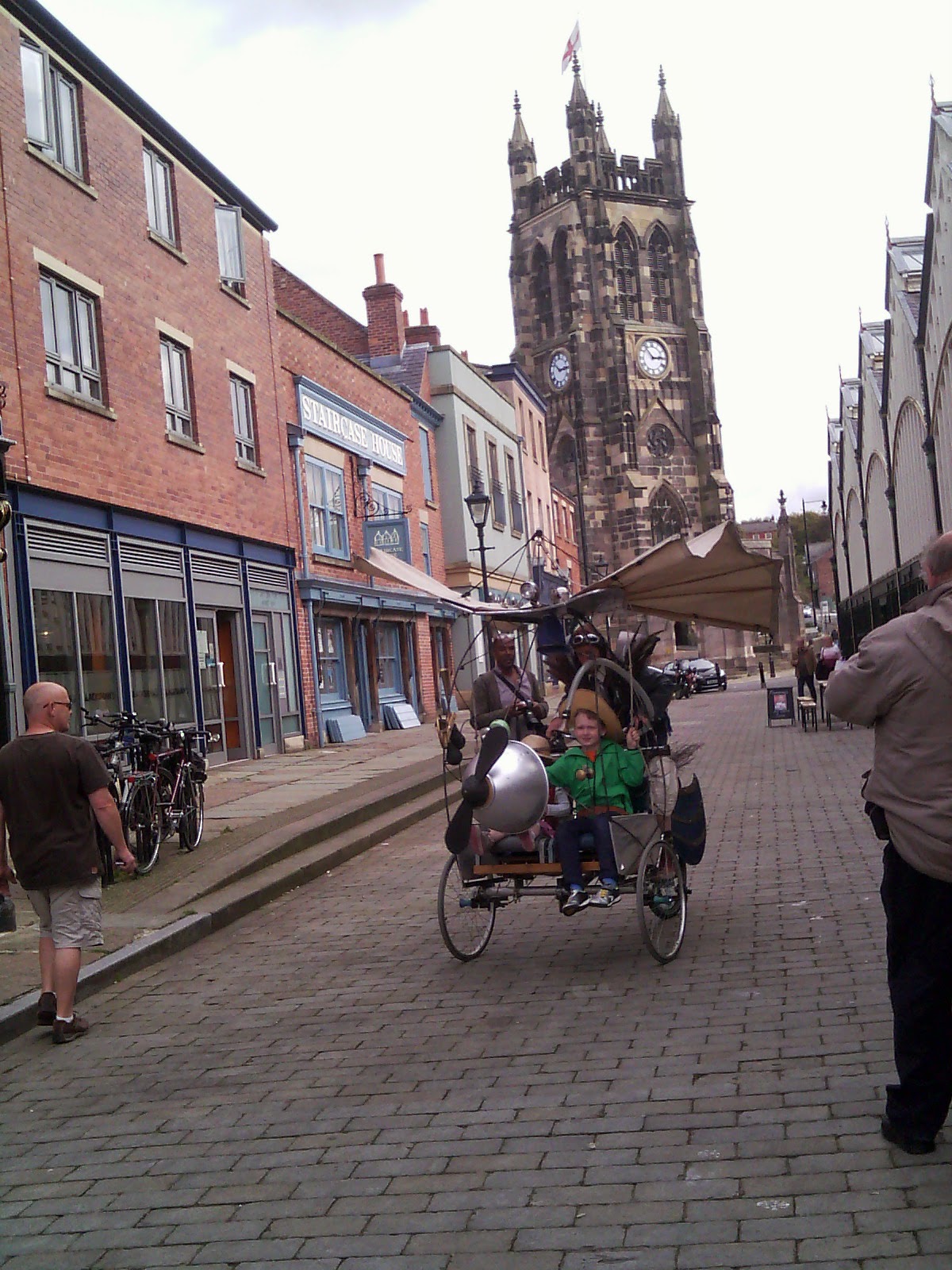 It's a great thing for children's imagination and even if she was was disappointed by not seeing a real zebra I didn't hear about it as she was just happy to have gone in the vehicle - which is attached to a bike, pedaled around by 'Captain Bigshot'.

She would have gone on the submercycle if we'd had time and she kept asking about it afterwards. Captain Calypso manned this one. Joining in was free of charge. 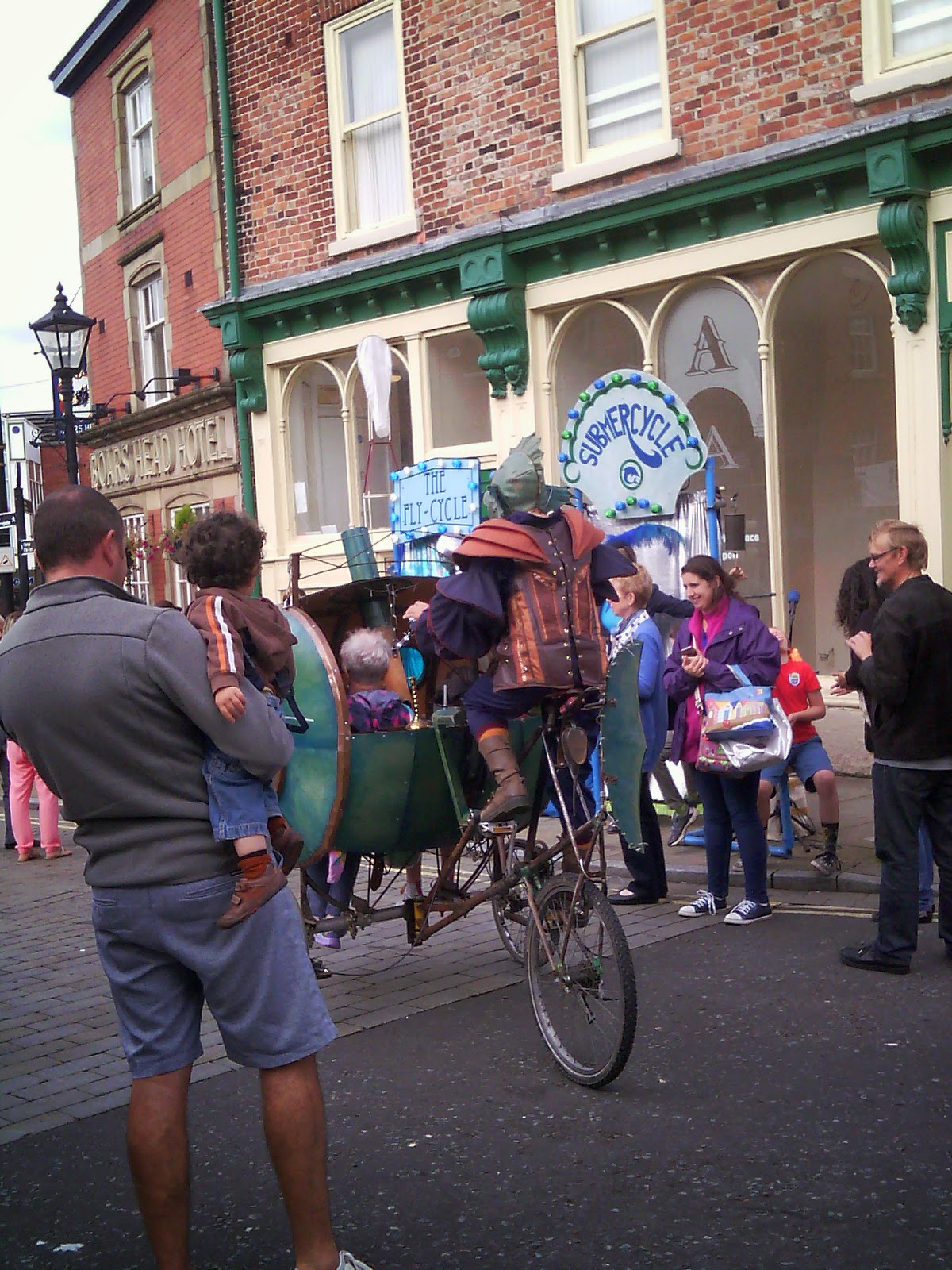 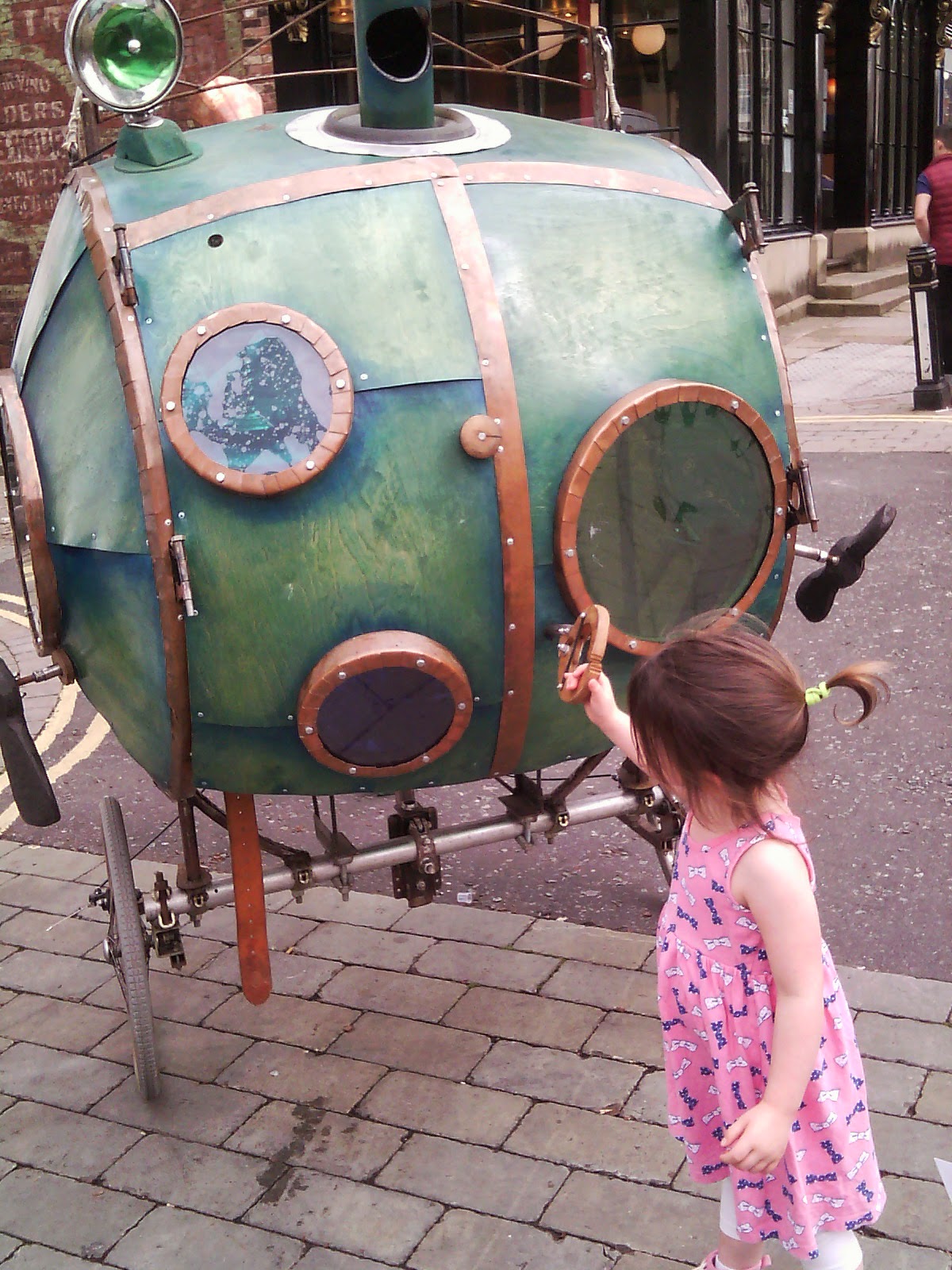 I think it's a wonderful street production and would be interested in seeing some of their other shows particularly 'Something to hold' which will be at the Ramsbottom Festival 19th-21st September for anyone in the region interested in checking them out.