August bank holiday weekend of this year I had a meet up arranged with some of my best friends from university. Unlike all my old school friends none of my university friends had had babies yet until one of the girls I used to live with, Helen, had a little girl in May this year. She arranged the meet up and we headed to hers in Farnworth. She suggested we try out the Bolton food festival which was a short drive away.

We went on the Saturday (23rd) and after some serious mood swings from the British weather it turned out to be a lovely hot sunny day. It was incredibly busy. The festival ran from the 22nd to the 25th of August and as well as the large variety of food and drink stalls there was live music, entertainment and children's activities including Cbeebies Katy Ashworth doing I can cook which G would have loved. Also 'Make It, Kids at Crompton' the shopping center running activities for children:

We didn't take part in these as we were having a quick catch up and I didn't find out about everything going on until afterwards! My reason for going to Bolton was just to see the girls but if I'd researched the food festival before hand and hadn't been seeing my friends I might have gone just to take G. It would have also been nice to go child free and relax, look around more and have a drink.

There were a few things I would have liked to have tried from a quick look around but having a fussy eater with me and with it being so busy we stuck to veggie noodles from an Asian stall. There was no time to go elsewhere and we spent long enough just queuing for the noodles! I think the girls had bratwurst as that was nearest where we were sat and they got served much faster but I'm vegetarian so went elsewhere.

Whilst looking for food and afterwards we were passed by a few ladies on huge stilts and dressed up. Two were together asking if you'd stolen their cakes and another was running off with a big trolley with the 'stolen cakes' on. There was also a man pulling a cart behind him with a giant inflatable lobster. These were the parts that G enjoyed.

There was one stall in particular that caught all our eyes when first passing through which was one that was selling what looked like mini (but actually very large) victoria sponges and wonderful looking merangues.
The stall belonged to The Little Round Cake Company and the cakes we spotted were called Tweeners. They looked wonderful and there was a large variety of flavours being sold on the day.

We got some as a treat and since my lovely friend has given us a lift and saved us the train fair.

I chose Lemon and blueberry cheesecake flavour which sadly is not available on their website at the moment. G chose the triple chocolate flavour. They were £2.25 each or four for £8 which was a great offer as you normally get small cupcakes from other bakers/decorators for £2 each but these were huge cakes. We had half of ours at the festival and the other half the next day. They also tasted as good as they looked, lovely soft moist cake (again if comparing you can't say that about a lot of cupcakes which have lovely decoration but often have disappointing dry sponge underneath) and I only wish I'd brought a box of four, but being on a budget I resisted. 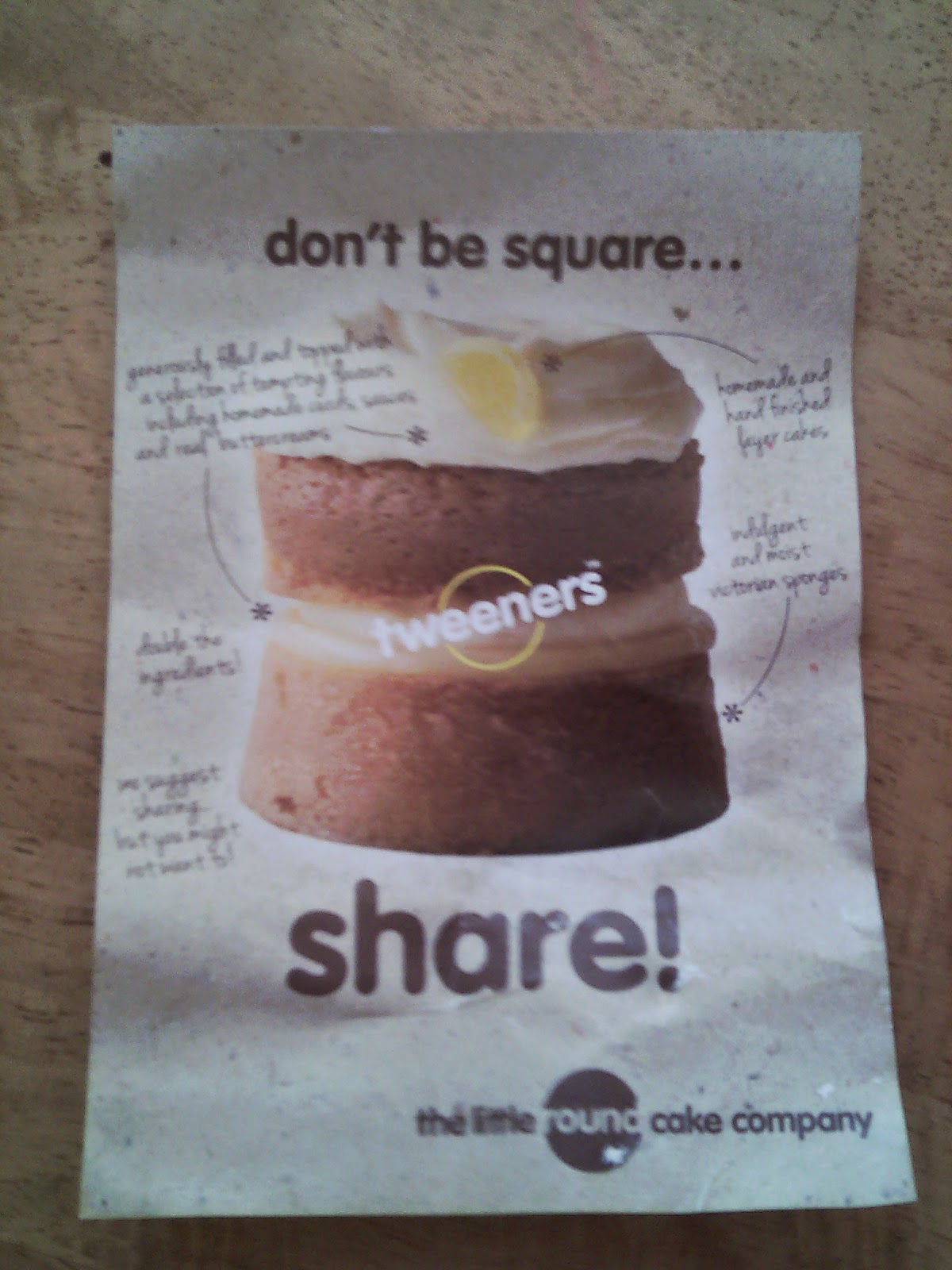 I did get a 10% off leaflet and you can buy from the website but with the postage that's not an option for me right now (not that I should be buying cake when I'm trying to get fit & healthy again) so I'm hoping they'll be coming to a food festival near me again soon!

They also had a large variety of beautiful looking meranges which could be brought it box sets and would be lovely for a gift and are now being sold by Selfridges. I would really recommend their cakes as a gift too or great for a tea party.

They are attending a few food festivals over the next few weeks. You can find the details on their facebook pages here and here.

The girl brought theirs and then we set off back to Helen's house for a cup of tea and a bit more of a catch up before all setting off home.

It was lovely to see the girls and hopefully will be seeing them again next month. G who got a little bored at points enjoyed the stilt ladies, cake, seeing auntie Helen and her baby and attempting to get a cuddle from her cat.


Manchester have a food festival starting this Thursday the 18th lasting until the 29th. Unlike Bolton there seems to be no children's activities planned but there is plenty of music on and if today's weather holds out it will be a lovely atmosphere. Great to pop into after work for a drink and food with friends if you don't have to get home. I'm hoping I'll get in at some point over the next 11 days to have a browse. I best get some second hand selling done first so I have some pennies!