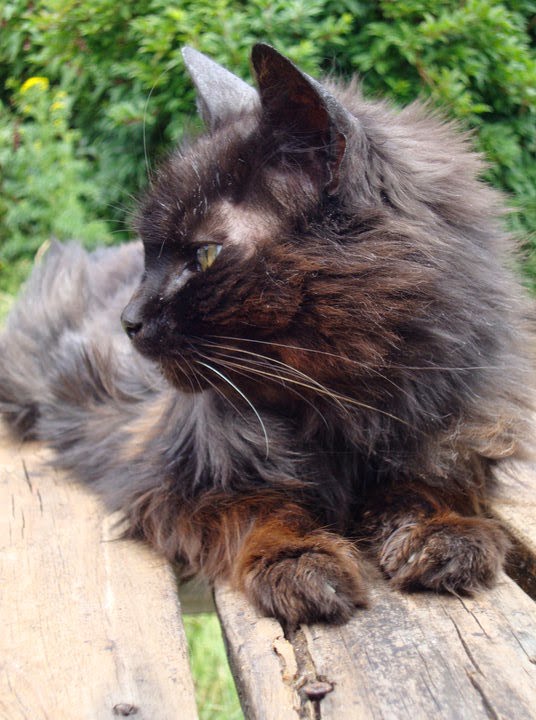 Whenever I used to walk to my sisters house down a particular road, or during the two years I actually lived at hers, I would often see two fluffy/scruffy looking black cats who seemed to live there. Both were very friendly and would mew a lot and follow you to be stroked, or maybe just because they wanted food.
One day, the more sociable one of the two followed me home. It was a lovely thing, incredibly fluffy and affectionate.

However quite a few months down the line (after a freezing winter) I realised I hadn't seen that one of the pair for a long time, and the quieter one seemed to be about less too. When we came across the other one, it came to say hello and as we were stroking it we realised what awful condition it was in. Its hair was matted and falling out, its skin was bad and its spine was sticking out dreadfully and when picking it up later it was as light as a feather, just like a bag of bones!

When with the cat and realising its condition I asked some of the local children playing out if they knew who owned it and what had happened to its sibling. It turned out the poor thing had died over the winter. It was upsetting and if its condition was anything like this one's it was no wonder! 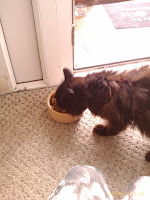 They didn't pinpoint the owners, so we let the cat follow us home (just round the corner) and gave him/her something to eat. The poor thing was starving and very thirsty too. It also had a very strong odor due to its bottom being dirty and its tail fur being matted up with dirt, as well as having runny eyes and having a tooth missing, so eating very messily.

Even though not as confident as its brother/sister, this cat too was extremely affectionate and wanted attention as well as something to eat.
I think it was the next day we fed the cat properly and my sister met it and saw what an awful state it was in and she was horrified. She took some photo's as evidence of animal cruelty as it was evident we were going to have to call the R.S.P.C.A to help this cat if it was going to survive and not suffer anymore from the neglect from its owners. However at this point we weren't sure if its owners were still around here or whether they'd just left the two cats to fend for themselves.
I took a couple of photo's myself at this point but you can't see from them just how bad a state he was in.

I was the one to call up the R.S.P.C.A and report the state of the cat to try and get him some help. The reaction I got however was disgusting and I won't be using their services again or donating to them.
They basically weren't the faintest bit interested unless he was unconscious and were going to do absolutely nothing about it. I was so angry when I got off the phone.

We weren't sure what to do at first, but then thought we would have to try the animal shelter that I had briefly volunteered at, the Humane Education Society in Wilmslow.  So we gave them a call. I explained the situation to them but currently they were full, however when I said how urgent it was they said they would try and get him a place as soon as possible but he would have to be checked for cat flu first as to not put the other cats there at risk.

We took him to the vets to get him assessed. They told us that the cat was a boy - we hadn't known yet and Morgan (my 10 year old nephew) had given him or her the temporary name of Starblade.
The vet thought he was in awful condition and said he wouldn't have lasted many more days if we hadn't started to care for him. So basically if we'd left it in the hands of the R.S.P.C.A he would have been dead.
He was extremely underweight, extremely matted and in bad condition but the vet tried to assess a rough age and estimated 11, however the next vet to see him a week or so later estimated about 14, so he was an old boy. He took tests for Cat Flu and then for the next week or so we were to care for him until a space came up.

We decided since we knew now it was a boy, to come up for a name for him. So me, my nephew and my brother wrote a list of names and then whittled it down using a dice. The final name was Theodore, which I think suited him so well. Despite him being such a mess, he was a beautiful cat, with massive eyes and a very cute high pitched meow. He was incredibly affectionate and wanted to be with someone all the time. 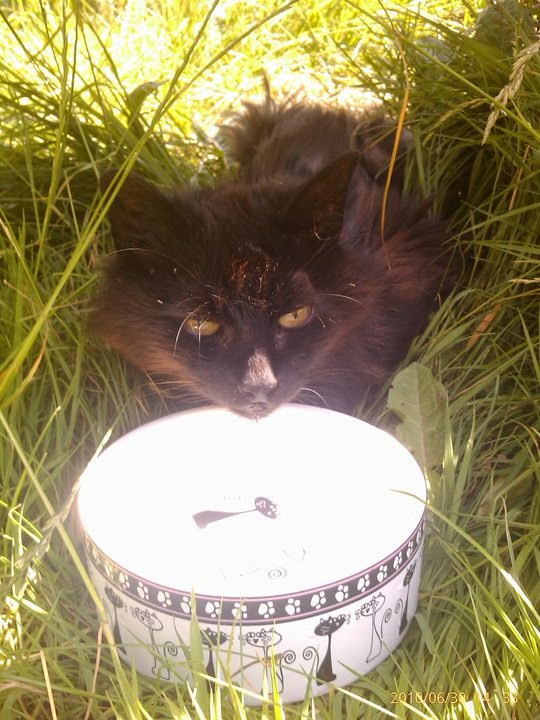 Even though it was upsetting and scary caring for him due to his condition, it was also lovely and we became very quickly attached to him as he was so loving and sweet. We just couldn't understand how someone could treat any cat like this, let alone one so lovely. There wasn't a nasty bone in his body and he was so calm and placid and seemed to want nothing more than to be loved.
We got the results from the vets and the good news was that he was flu free so was ok to go to the shelter.
The sanctuary finally had a place for him, which was great news, so we took him in, although it was sad to say goodbye, we knew he would be well looked after.

We missed him a lot and a couple of times went to visit, he didn't seem quite himself though, but everyone had fallen in love with him just like us, due to his gentle sweet nature. He also had the incredibly cute habit of putting a paw up to ask for food or pawing you. He also did this if he wanted a cuddle which was often.
They had groomed him and removed his mats, so he was looking a bit bald and very skinny but at the same time a lot better. He had been cleaned up and treated for worms and flea's etc and was being slowly fed up, although he was occasionally having tummy troubles.
The bad news came though, when the other tests results came back that the vets had done ....his Liver function tests, which showed him to have Liver Failure. This meant that he was not going to have very long left. We couldn't believe it.

Due to this and the fact we had been missing him a lot, my sister made the decision that for his final time, however long he may have, we would take him and look after him ourselves.
So we went out and brought him a lovely cat bed, some grooming brushes and some bits and pieces including a separate litter tray so as not to upset Bella, my other cat, and my sister paid the adoption fee's and we brought him home :)

Theo had safe warm loving home for his last few months. He enjoyed sleeping in my sisters laundry basket and sadly would get very upset and howl if he was left on his own. I think this may have been due to how unwell and old he was.

I had to move away to Leeds for work a couple of months later and sadly couldn't take him with me as I was moving into a flat with no garden and my other cat Bella gets hysterical around other cat's, even one as loving as Theo. I was very upset to leave him but did come back to see him a few times.
One of those times when I arrived he climbed up onto my knee and put a paw on each of my shoulders and nuzzled his head into me, like a real human hug. He also used to dig like a dog he was such a character.

There were a two horrible scares we had with Theo before it was his time to go, where he would have fits and try and go under a bed to I assume die alone as cat's often do. It was very upsetting.
Devastatingly my sister called me 23rd of December 2010, the day before I was due to travel back for Christmas. Theo had had another episode and was very ill. His kidneys were failing and the vet decided he was suffering too much to be alive. I desperately wanted to hold him, comfort him, to say goodbye, but the vet would not wait one more day and Theo was put to sleep. It was heartbreaking. It was a sad Christmas not having him with us but instead having to bury him.

During his time with us we had an beautiful adoring pet. We managed to make the life he had left so much better. We couldn't have done this without the help of the animal sanctuary and without the financial help from my sister.
Why anyone would choose treat an animal like this, especially Theo I really don't know. He truly was the sweetest creature I have ever come across. R.I.P Theo.

*If you live anywhere near Wilmslow and are thinking of getting a Pet, please consider adopting from the shelter mentioned above. Their name is linked to their site. Or if you would like to make a donation feel free. They are a fantastic organisation and depend on donations. They provide wonderful care for the animals there and helped us so much with Theo.
Posted by Unknown at 08:35